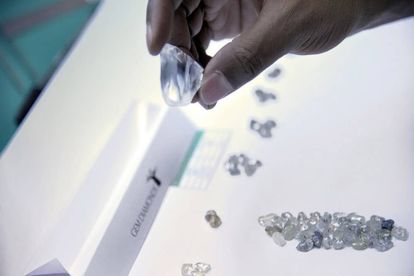 The Letšeng diamond mine in Lesotho has announced the discovery of one of the biggest diamonds in the world this year.

According to a statement released on Friday by the mine’s owner, Gem Diamonds, it is a 442-carat Type II white diamond.

Analyst says value may be US$18-million

No official estimated value has been disclosed at this point as it is difficult to establish a price for such stones before cutters can evaluate them. However, news agency Bloomberg quotes Edward Sterck, analyst at BMO Capital Markets, as saying that it could be worth as much as US$18-million.

“Given the rarity of such large stones, demand for big diamonds has traditionally been resilient, even at times when the wider industry has struggled,” Bloomberg said.

With the damage caused to the global economy by the pandemic, high-end luxury products, including diamonds, have struggled of late.

Lesotho mine has a global reputation

Letšeng is known as the highest dollar-per-carat kimberlite diamond mine in the world and is also one of the world’s highest diamond mines at 3 100m above sea level.

“The recovery of this remarkable 442-carat diamond, one of the world’s largest gem-quality diamonds to be recovered this year, is further confirmation of the calibre of the Letšeng mine and its ability to consistently produce large, high-quality diamonds,” said Gem Diamonds CEO, Clifford Elphick.

“It is also a fitting testament to the dedication of the employees in the group to have recovered such an extraordinary diamond, whilst at the same time maintaining strict adherence to health and safety precautions during the global Covid pandemic.”

Part of proceeds to community project

Elphick also confirmed that portion of the proceeds from the sale of this diamond will be used to fund a special community project, as agreed with the Government of Lesotho.

Gem Diamonds describes itself as a leading global diamond producer of high-value diamonds. The company owns 70% of the Letšeng mine.

According to the specialist mining website Mining.com, the last stone over 100 carats Gem Diamonds unearthed at the mine was a 183-carat white Type IIa diamond in February this year.

Since acquiring Letšeng in 2006, Gem Diamonds has found more than 60 white gem-quality diamonds over 100 carats each, which makes the mine the world’s highest dollar-per-carat kimberlite diamond operation.