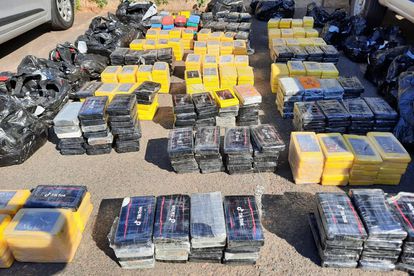 Police seized more than half a tonne of cocaine at a container Depot South of Durban on Tuesday. Photograph: The Hawks

Police seized more than half a tonne of cocaine at a container Depot South of Durban on Tuesday. Photograph: The Hawks

The Hawks has swooped on a drug smuggling cartel and seized half a ton of cocaine – valued at more than R200 million – that was concealed in an import container labelled as containing  ‘animal food’ at a storage depot in Durban..

Hawks spokesperson, Lieutenant Colonel Philani Nkwalase, said that the police had conducted an intelligence driven operation that led to the massive more than R243 million cocaine bust in Isipingo in the South Durban basin.

“An intelligence driven operation was conducted in the early hours of 22 June 2021 at a container depot on Avenue East in Isipingo after information of smuggling of drugs into the country was received,” Nkwalase said.

“The Hawks’ Serious Organised Crime Investigation team with the members from Durban Harbour as well as Crime Intelligence Border Security proceeded to the depot where the container which supposedly had animal food was identified and a search was conducted,” he said.

“Twenty-six canvas bags with Tik Tok and Jaguar brands were found with bricks of cocaine. The drugs weighed 541 kilograms with an estimated value of more than R243 million were confiscated,” he said.

He said the Hawks investigation into he matter to seek and arrest the perpetrators was ongoing.

National Head of the Hawks Lieutenant General Godfrey Lebeya praised the team for uncovering and seizing the massive consignment of drugs.

“We are closing in on the drug cartels. This drug bust shows that there are organised criminal groupings that are involved in organising the movement of these dangerous dependent producing substances from one country to the other,” he said.

“While fighting the supply of these substances, we appeal to the community not to demand the supply which will ultimately help in closing the market,” Lebeya added.

The latest drug bust follows several police breakthroughs, not least the seizure of R400 million of pure cocaine, that the Hawks and a multi-disciplinary law enforcement task team intercepted on the N1 Freeway, when it was being transported in a boat pulled on a trailer on 1 June,