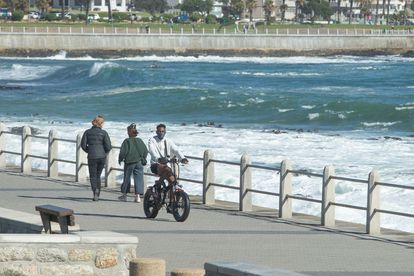 CAPE TOWN, SOUTH AFRICA – AUGUST 10: Cyclist on the sea Point promenade on August 10, 2021 in Cape Town, South Africa. It is reported that a recommendation was made to implement a time restriction for cyclists on the Sea Point Promenade. (Photo by Gallo Images/Misha Jordaan)

CAPE TOWN, SOUTH AFRICA – AUGUST 10: Cyclist on the sea Point promenade on August 10, 2021 in Cape Town, South Africa. It is reported that a recommendation was made to implement a time restriction for cyclists on the Sea Point Promenade. (Photo by Gallo Images/Misha Jordaan)

Bicycles may be restricted on the Sea Point Promenade in Cape Town but not to worry, nothing has been set in stone as yet. The proposal is still up for discussion, and more importantly, public participation but why the need to restrict them? Ward Councillor for Ward 54 (Sea Point, Camps Bay and Clifton), Nicola Jowell, explained this.

BICYCLES MAY BE RESTRICTED DUE TO AN INCREASE IN CRASHES

Jowell said it was decided in 2013 to allow bicycles, e-bikes, skateboards etc to make use of the Sea Point Promenade. While the decision was well-received, Jowell said there has been an increase in the number of users over the last eight years. In some cases, the speeds of these devices have also increased, causing crashes between pedestrians and users, which has resulted in injury.

“Thus, apart from further site visits and engagements with stakeholders and others, the City will also host a public participation process where users, the public, residents, and interest groups will have the opportunity to voice their concerns, opinions, comments, and proposals,” said Jowell.

“The Sea Point Promenade is an iconic and valued tourist attraction. It is used by Capetonians from all corners of the city and a highlight for visitors from elsewhere,” she added.

WHAT ABOUT A DEDICATED LANE ON THE SEA POINT PROMENADE?

In January 2020, Jowell submitted a motion to the Transport Portfolio Committee for the review and investigation into the provision of a dedicated bicycle lane on the Sea Point Promenade.

“This motion supported the use of bicycles on the Promenade, but recognised the need to look at how/what could be implemented to make it safer for all,” she said.

This motion was adopted by the Portfolio Committee and the City’s Transport Directorate conducted an investigation that included weekend surveys of the area to collate data on the volumes and different modes of transport in use, as well as peak times. The area was mapped out with the aim of looking at what options may be applied to resolve or alleviate the issues.

This report was then tabled at the Portfolio Committee last week.

“The primary focus of any solution should be on the safe sharing of the space for all users, keeping in mind that up to 90% of users are joggers or walkers and that many are vulnerable people, such as the elderly, and children. Also of importance is the travelling speed of electric scooters and e-bicycles, and how this contributes to conflict, accidents, and injuries,” she said.

Following on from the meeting, it was decided that further site visits will take place under the guidance of a task team, and for public participation to take place on any proposals.

According to Cape Talk, authorities are considering banning cyclists from the Sea Point Promenade from 11:00 on weekdays, Saturdays, and on public holidays.