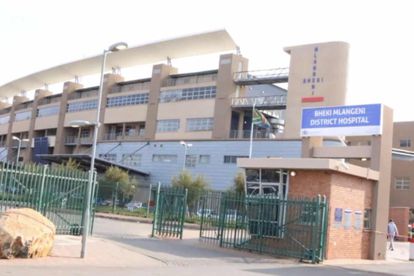 The Gauteng Department of Health has confirmed the precautionary transfer of the Bheki Mlangeni Hospital CEO after an alleged implication in a case of misconduct.

The issues surrounding the case must still be verified and a determination will be made accordingly. In the meantime, the CEO has been moved from the hospital and Ms Makabedi Makhetha will be acting in the position.

Acting Health MEC Jacob Mamabolo said the case of alleged rape that took place at the Bheki Mlangeni Hospital is being looked into. The department will appoint an independent investigator to help finalise the matter following an internal preliminary report.

The matter has also been referred to the South African Police Services (SAPS) to investigate.

This comes after reports that a male psychiatric patient allegedly raped another male patient on Saturday 17 October. The Democratic Alliance (DA) have since called for an urgent investigation into the alleged crime, as well as for provincial health officials to probe the efficiency of the Bheki Mlangeni Hospital’s CEO after she allegedly resumed work having been suspended earlier in the year.

DA shadow minister for Health Jack Bloom lashed out saying that the CEO was able to return to her post after being suspended in the wake of an alleged murder at the hospital earlier this year.

Bloom said that in his view, the CEO is the “worst in Gauteng” and should have been removed long ago after a string of violent assaults on patients and staff.

“New management is needed urgently at the hospital to ensure that patients and staff are in a secure environment without threat of violence,” said Bloom.

‘A NEED TO URGENTLY RESOLVE THE BROADER CHALLENGES’ – MAMABOLO

Mamabolo said there is a need to urgently resolve the broader challenges at the Bheki Mlangeni Hospital and restore the confidence of the community in the facility’s capacity to continue providing much-needed healthcare services.

“The department remains committed to improving the patient experience of care in Gauteng Health facilities.”

On Monday 19 October, following the alleged rape incident at the Bheki Mlangeni Hospital, Mamabolo said: “I want to reassure members of the public that the issue of safety at our public health facilities is a priority. We continue to work with law enforcement agencies to strengthen preventative and response measures.”

Mamabolo said the Gauteng Health Department provided medical and psychological support to the patient and offered counselling to the family.