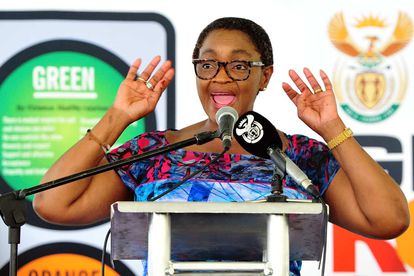 The National Prosecuting Authority (NPA) has called for the direct imprisonment of former Minister of the Department of Social Development, Bathabile Dlamini.

WILL BATHABILE DLAMINI BE JAILED?

Dlamini was charged with perjury, alternatively, the Contravention of Section 38 (5)(b) the Superior Courts Act 10 of 2013 (lying under oath).

The charges relate to her testimony during an inquiry established by the Constitutional Court into her role in the 2017 social grants crisis.

The inquiry that was chaired by former Judge President B.M Ngoepe, stemmed from a Constitutional Court application brought by Black Sash Trust, joined by Freedom Under Law over the South African Social Security Agency (SASSA) and Dlamini’s failure as the Executive Officer, to appoint a service provider for the distribution of social grants.

He further argued that the accused held a high office within the Public Service and should have been exemplary. He pleaded with the court to impose a sentence that will send a message that lying under oath cannot be tolerated.

Perjury is punishable by both incarceration and a substantial fine. In rare cases, both can be given.

Dlamini’s lawyers argued that their client could not afford to pay a hefty punitive fee, given that her salary from the ANC Women’s League is ‘not a permanent arrangement’. They also claim that Dlamini is a single parent who is paying tuition fees for her two daughters, while also caring for her elderly parents.

The case was postponed to 1 April 2022, for delivery of sentence.

ALSO READ: Sorry, how much? Here’s what Bathabile Dlamini STILL earns each month