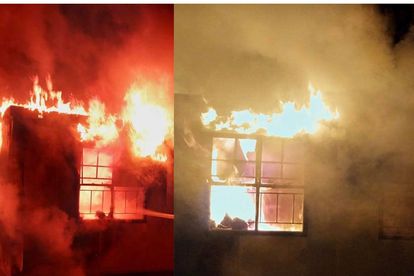 It’s been barely a week since Barcelona Primary School was set alight, this unfortunate event has reportedly repeated itself this evening, Thursday, 4 August.

WHY IS BARCELONA PRIMARY SCHOOL TARGETED

Kasie FM News has reported that Barcelona Primary School in ETwaTwa, Ekurhuleni,
went up in flames again this evening.

The incident follows the torching of the school on Tuesday, 2 August, where an administration block and several grade R classes were gutted by fire.

The suspects behind this arson attack are unknown. The local radio station reported that about 2000 children will be affected.

This destruction of property is linked to demonstrations over the substandard conditions of the school.

ALSO READ: No foul play suspected after family perished in a house fire

“According to reports, parents are dissatisfied with the school’s lack of development. They claim that since 2016, there have been promises of developments that have yet to materialize”.

In the first incident, the SABC reported that there were no injuries or fatalities as the school was closed when the fire occurred, however; security guards were at the school.

No arrests have been reported yet.

In response to the incident, the Gauteng Department of Education (GDE) spokesperson Steve Mabona told the Daily Sun that vandalism of school infrastructure will not be tolerated by the department.

WHAT WILL HAPPEN TO THE TEACHING AND LEARNING

As an estimated 2000 learners are likely to be without a school, one wonders what will happen to the learners and the educators whose duties are brought to a halt because of the incident.

Last month another school in the Free State was a victim of a fierce inferno.

The devastating fire broke out at Inuthuko Kathleho Secondary School in Vrede in the Free State, where multiple classrooms were burned to ashes leaving over 1000 learners and 31 teaching staff without a school building to continue school operations.

According to The Free State Department of Education, the school was severely damaged, and it will cost about R150 million to rebuild and refurbish the institution.