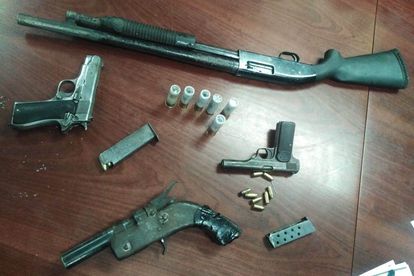 Several alleged members of a gang of armed robbers that are said to have been “terrorising” businesses in the Verulam area, 27km north of Durban, have been arrested by police.

Four firearms, including a shotgun and 18 rounds of ammunition, were recovered from the suspects. The serial numbers of all the firearms were filed off.

Three suspects aged between 25 and 31 were arrested on Thursday and face charges of possession of unlicensed firearms and ammunition.

A joint operation aimed at tracing suspects who were terrorising businesses in the Verulam area was conducted,” said police spokesperson Colonel Thembeka Mbele.

“The information led police officers to Lindelani in KwaDukuza, where two men aged 25 and 27 were arrested. On further investigation, police were led to another house in the same area where a 31-year-old man was arrested.”

Mbele added that the men had been linked to a business robbery that was committed last month in the Verulam area.

Two co-accused, aged 18 and 29, were arrested earlier this month for business robbery.

According to Mbele, the firearms seized in the latest arrests will be subjected to ballistic testing and the suspects will be profiled to ascertain whether they are linked to other robberies committed in Verulam and the surrounding areas.

The KwaZulu-Natal Provincial Commissioner, Lieutenant General Jula, praised the detectives for the arrest and the recovery of the firearms.

In late July, bullets flew during an armed business robbery at a pizza parlour in Verulam when a security company interrupted four armed robbers. Nobody was injured and the suspects got away.