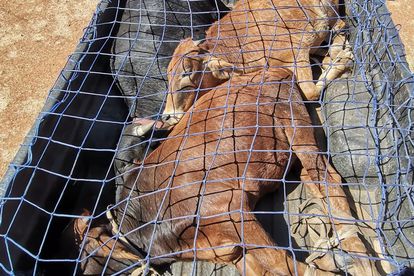 Three suspects will appear in the Lehurutshe Magistrate’s Court in the North West on Monday.
But as it stands, they won’t face any charges of animal cruelty. That’s despite carrying out livestock theft by stealing three cows. And then tying all three living animals flat onto the back of a Toyota Hilux Bakkie.

Police arrested the three suspects behind the incident on Thursday, after Free State Police received a tip-off about cows being loaded on a bakkie near Swartkopfontein.

Police have confirmed that while investigations are still ongoing, the three suspects are not currently facing charges of animal cruelty.

Once SAPS made the announcement of the upcoming court appearence, South Africans across all walks of life took to the comments to demand that animal cruelty charges are added. In the photo provided by police, not one or two, but THREE cows were tied up lying flat on top of the bakkie. In order to make sure the animals could not stand, they were trapped under a net acting as the bakkie’s canopy.

The issue of livestock theft has long plagued SAPS and local farmers. Some police officers were also recently caught being a lot more involved than they should of.
In July, five SAPS members from the Free State were arrested on charges of stock theft