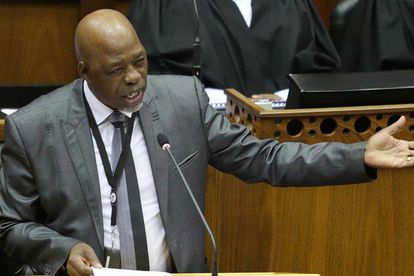 “There is none in society, including its own membership, who can claim to remember anything of substance the EFF achieved in Parliament, other than the vicious efforts to erode and trash important symbols of our democracy, including Parliament as a symbol of democratic order and, recently, [former president] Nelson Mandela as a symbol of freedom and reconciliation,” the statement reads.

The document then took aim at Malema, who ‘vilified’ Madiba’s memory; a man who, alongside other revolutionaries, made huge sacrifices for the better of all South Africans. It said the Malema’s opinions show an “unprecedented level of political infantism and ignorance which is naturally symptomatic of poverty of ideas.”

“The attack smacks of the tendencies of those peacetime bogus revolutionaries who always seek to trash and kill the heroic legacies of revolutionary forebears in order to portray themselves as true martyrs and revolutionaries of the day. It can only be a psychotic manifestation of the delusions of grandeur that drives one to think they can displace the iconic Madiba through a vitriolic public campaign in order to take his place as a present-day hero.”

The ANC’s letter added that Madiba’s legacy can’t ever be erased by  “genetically modified revolutionaries who, because of Madiba’s sacrifices and struggles, today find it fashionable to be ‘revolutionaries’ because there is no fear of harassment, torture, detention without trial, or death.”

“One of our MPs, Mandla Mandela, was thus correct to refuse to wrestle with a pig in the mud by acceding to Malema’s invitation for a debate on Madiba’s legacy.

“If Malema and EFF genuinely needs political education on Mandela’s revolutionary struggle life, they need to look no further than their deputy leader, Floyd Shivambu, who only three years ago dismissed those who claim Madiba has sold out as suffering from ‘intellectual laziness’ and are ignorant of ‘the complexities of managing a political translation’ in his PoliticsWeb article ‘Mandela did not sell out’. Let charlatans wrestle among each other regarding their lies, deceit and political schizophrenia.”

Oh and it’s not over yet. The ANC doc then moved on to the official opposition and the party responsible for eroding the ruling party’s national support. According to the ANC caucus said that the  “tactically flawed tendency of the DA to stage walkouts during the processing of bills it disagrees with in order to manipulate the quorum of the House is myopic, petty, politically bankrupt, and an antithesis to the climate of multiparty democracy as enshrined in our democratic Constitution.

“Our parliamentary multiparty system enjoins all political parties to participate meaningfully and actively in the decision-making processes of Parliament, including in debates and voting on bills before the House. It is inevitable that the opposition would differ with the majority party; however, that ought to be expressed through the formal process of Parliament rather than walking away.”