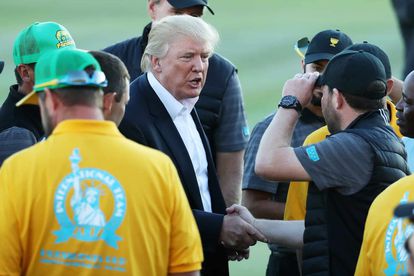 The Trump Administration have kept its finger on the pulse with what’s happening in South Africa. Land expropriation and state capture have cropped up on their radars, but now, it would seem that a much-maligned copyright law has caught their attention – and the ANC have been hammered by one of their fierce political rivals.

South African trade with US “under review”

If you’re wondering how copyright law can cause a diplomatic incident, allow us to explain: The recently-released Copyright & Performers’ Protection Amendment Bill has shifted the wording on ownership rights. Critics claim that the document – which is awaiting a signature from President Ramaphosa before it becomes law – takes power and accreditation away from the creatives.

Filmmakers, musicians and performers have all signed a petition on the matter, demanding that the bill is halted before being officially ratified. This wave of protest has piqued the interest of the US Trade Representative (USTR) – which is an executive office of the Trump Administration.

They are concerned that the amendments to South African law don’t comply with their own regulations; namely, their Generalised System of Preferences (GSP). Things like labour rights, market access, and yes, intellectual property rights, are all non-negotiable criteria that their “beneficiaries” have to meet.

The proposed change in South African law – which apparently weakens an artist’s claim to their own work – violates this set of criteria. Violating these conditions could end up costing South African goods duty-free entry into the United States – which isn’t ideal as the USTR imports 3 500 products from the 119 designated beneficiary countries and territories. Getting the boot from here would be an economic nightmare for SA.

Here’s what the USTR had to say about the situation:

“The USTR has announced it is opening new GSP eligibility reviews for two countries. South Africa, based on IP protection and enforcement concerns, and Azerbaijan, based on worker rights concerns.”

“USTR is accepting a petition from the International Intellectual Property Alliance based on concerns with South Africa’s compliance with the GSP IP criterion, in the area of copyright protection and enforcement.”

“Furthermore, USTR will announce dates for a public hearing and comment period for the new and existing GSP country eligibility reviews in an upcoming Federal Register notice.”

Now we’ve had our little lesson on economic policy, let’s get into the political beef, shall we? The Freedom Front Plus are very unhappy with the ANC, for pressing ahead with a law that contradicts USTR rules. Jaco Mulder is a trade spokesperson for FF+, and he’s fuming with the ruling party for their “rash policy direction”:

“Trade agreements between South Africa and other countries can be seriously jeopardised by the destructive and rash policy direction of the ANC. The recent announcement and action taken by America should also leave no doubt about the fact that the international community is keeping a very close eye on South Africa.”

“The American government just announced that the duty-free import of certain South African products to America will be reviewed due to concerns with the controversial amendment bill on copyright. Our eligibility for preferential trade will be reviewed due over how SA deals with the protection of intellectual property.”

With the Trump Administration keeping tabs on the situation, it’s thought that the pressure to take the Copyright & Performers’ Protection Amendment Bill off the table will now intensify. The ANC are yet to respond to the matter, but they now have a diplomatic tightrope to walk.