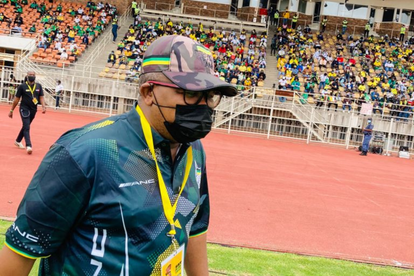 The ANC has been called out after images of a logo bearing similarities to a luxury car brand surfaced online. Image: Fikile Mbalula/ Twitter

The ANC has been called out after images of a logo bearing similarities to a luxury car brand surfaced online. Image: Fikile Mbalula/ Twitter

The ANC has come under fire after images surfaced online of a new design for party t-shirts. Many feel that the logo bears an uncanny resemblance to that of the Mercedes-Benz AMG brand.

The African National Congress held its annual January 8 birthday celebrations over the weekend. Countless party members were depicted during the ceremony, including Transport Minister Fikile Mbalula.

Mbalula took to his official social media page to share a picture of himself in front of a stadium filled with ANC supporters. Mbalula captioned the post:

Unbeknownst to the Minister at the time, the photo would earn him some fierce criticism due to the design of the ANC logo on his shirt.

Certainly, many called out the resemblance of the badge to that of the luxury car brand, urging the brand to take action over the situation. Take a look at just a handful of comments on the resemblance below:

“Kodwa why you disrespecting the AMG badge so much?”

“And then the AMG logo??? Y’all steal everything sies.”

“Nothing about that picture gives “going strong” vibes. Not you. Not the background. Not that tshirt.”

The ruling party has certainly enjoyed more cheerful moments than its recent birthday shindig. The ANC faced heat from all sides amid the event, including from within its own ranks.

After struggling to service salaries for ANC employees, the party had committed to a more modest affair. The COVID-19 restrictions also put a damper on things with the usual large crowds barred from attending.

Furthermore, ANC Youth League members also staged a protest outside of an event President Cyril Ramaphosa hosted, claiming that entry had been dished out in a factional manner.