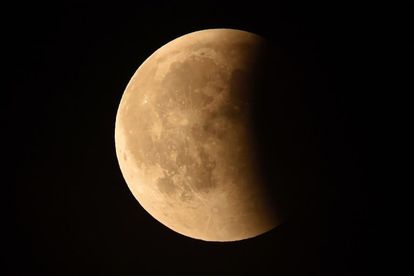 A “blood moon” eclipse is seen over the roof of the Chambord Castle in Chambord, France on July 27, 2018. AFP PHOTO / GUILLAUME SOUVANT

A “blood moon” eclipse is seen over the roof of the Chambord Castle in Chambord, France on July 27, 2018. AFP PHOTO / GUILLAUME SOUVANT

You’ve already seen the pictures of the Blood Moon / lunar eclipse, including those that look like street lamps all your mates took, but they’re nothing on this incredible time lapse that shows the whole thing.

For many of us, the eclipse wasn’t visible because the weather was a bit dodgy. But that’s what the internet is for, right?

#EclipseLunar
From the beginning to end. This is beautiful pic.twitter.com/Ki9DRGxUtr

Why this lunar eclipse was such a big deal

The longest “blood moon” eclipse this century dazzled skygazers across the globe Friday, coinciding with Mars’ closest approach in 15 years in a thrilling celestial spectacle.

As Earth’s constant companion slowly sailed across the skies, crowds gathered around the world to catch a glimpse of the rare phenomenon.

Beside Lake Magadi, 100 kilometres southwest of the Kenyan capital Nairobi, young members of the Maasai community watched the eclipse through a high-powered telescope provided by a local couple.

“Until today I thought Mars, Jupiter and the other planets were in the imagination of scientists,” Purity Sailepo, 16, told AFP.

“But now I’ve seen it I can believe it and I want to be an astronomer to tell other people.”

Unlike with a solar eclipse, viewers did not need protective eye gear to observe the rare display.

How often does the blood moon lunar eclipse occur?

The blood moon is a bit different to the usual full moon and new moons, occurring once or twice a year on average. There’s a lot of cool science stuff that goes into making it happen, but since it’s a weekend, we’ll let you off for now.