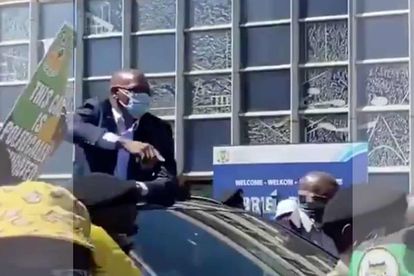 African National Congress (ANC) Secretary-General Ace Magashule paraded through the streets via a car’s sunroof after his appearance at the Bloemfontein Magistrate’s Court on Friday 19 February 2021.

Magashule and others appeared in connection with the Free State R255 million Asbestos case. According to reports, they were all granted bail and the case was subsequently moved to the High Court and postponed until August 2021.

ACE MAGASHULE PARADES THE STREETS ALONGSIDE HIS SUPPORTERS

When interviewed after his court appearance, Ace Magashule once again, said he has done nothing wrong. He also said he hopes the case will be finalised as soon as possible despite the lengthy postponement.

Thereafter, video footage made the rounds of Magashule parading through the streets via a sunroof. Large crowds could be seen walking alongside the car with ANC regalia, flags. Many could be heard singing.

“They are all charged with more than 70 counts of fraud, theft, attempted theft, corruption in contravention of the Prevention and Combating of Corrupt Activities Act, money laundering and contravention of various Asbestos Regulations, promulgated in terms of the Occupational Health and Safety Act 85 of 1993,” the NPA said in a statement.

Others said at least half of those who gathered were not wearing masks. The South African reached out to Free State SAPS Brigadier Motantsi Makhele for comment regarding the large crowds and how the situation was being handled, however, there was no response.

Apart from Ace Magashule and the other suspects, a further three senior government officials were arrested by the Hawks’ serious corruption investigation team in the early hours of Thursday in Bloemfontein in relation to the asbestos case. Following their appearance, they can now be named.

Nozipho Molokoe – The Chief Financial Officer (CFO) for the Department of Human Settlements from 1 December 2015 to 31 March 2017;

Thabiso Makepe – The Chief Engineer of the Department of Human Settlements from 1 April 2014 to 31 March 2017; and

Albertus Venter – The head of the legal department in the Free State (FS) Office of the Premier.