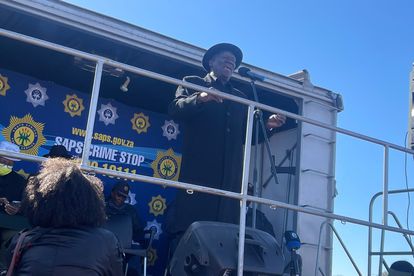 Police Minister Bheki Cele said 137 AK-47 cartridges were found after the shooting at a tavern in Soweto. PHOTO: Twitter/@LirandzuThemba

Police Minister Bheki Cele said 137 AK-47 cartridges were found after the shooting at a tavern in Soweto. PHOTO: Twitter/@LirandzuThemba

137 empty AK-47 cartridges were found strewn at the tavern in Soweto where 15 people were shot dead on Sunday morning.

Police Minister Bheki Cele was speaking to the community of Nomzamo informal settlement during the site visit of the scene on Monday.

Scores of bullet cartridges were found at the scene, with AK-47 rifles clearly being used.

“You put 30 bullets in it, meaning they would reload and reload the AK-47, which means those people meant serious business in the killing… There were cartridges from small guns too. It’s a group of people who intended to come here and do the damage that they did.”

15 people were killed when a group of armed men entered the tavern at the informal settlement in Orlando East. The group opened fire at the patrons who were leisurely drinking at the Emazulwini tavern. Nine other people were injured.

The motive of the killings is not known and the assailants are still at large.

CELE TO CLEAN UP GUNS IN THE COMMUNITY

The Minister said they will be cleaning up the community of illegal firearms in a door-to-door operation.

“Like we do door-to-door [electoral] campaigns, we will do door-to-door to find illegal firearms. The fact that people arrived with an AK-47 and killed so many people, we must search mattress to

Speaking to News24, a patron who was present during the shooting stated that it took him 20 minutes to realise his life was spared.

The patron, who was covered in blood, said the killers were heartless during the massacre.

“They came armed. They were heartless. I have never seen such brutality,” the patrol told News24.

The patron arrived at the tavern around 19:00 for a few beers after work. One of his friends died in the shooting.

“We arrived carrying some beer cans. My friend, obsessed with playing snooker, went to the pool table and started playing. I was seated at the corner with other people drinking. We had fun until around 22:00, when our fun was abruptly stopped. I saw a man carrying an AK-47, opening the glass sliding door.”