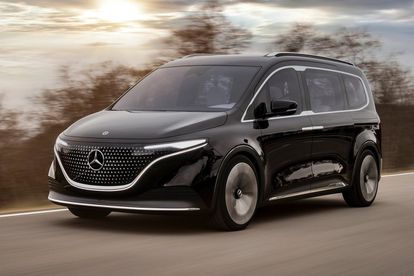 Mercedes-Benz is no newcomer to the multi-purpose vehicle (MPV) segment, as motorists are familiar with the V-Class moniker and badges such as Viano and Vito. Now, the Stuttgart-based manufacturer is lifting the veils off an even smaller Merc van dubbed the T-Class through its EQT concept.

According to the British motoring scribes over at Autocar, the EQT is basically a near production-ready taster of the new T-Class MPV.

“We are expanding out portfolio in the small van segment with the forthcoming T-Class. It will appeal to families and all those private customers, whatever their age, who enjoy leisure activities and need a lot of space and maximum variability without forgoing comfort and style.”

The Mercedes-Benz EQ concepts all feature the same sharp lines, narrow headlamps and massive alloy wheels. In the case of the EQT, it rides on mammoth 21-inch rims that are far too impractical for the segment. There’s also a light strip to connect the headlamps with the LED taillights.

The fine cabin appointments in a T-Class won’t really raise an eyebrow. After all, Mercedes-Benz owners expect Nappa leather, gloss black trim, ambient lighting and usual brushed metallic round air vents. But what might not be the most practical choice is the contrasting black and white upholstery, because you sit on white leather.

It remains to be seen whether the T-Class will feature the dual sliding doors on both sides, three individual seats in the second row, and the electric longboard mounted in the boot that are current hallmarks of the EQT. The most likely attribute will be be a removable third row of seats to make way for more leisure gear when seven seats are not needed.

MBUX infotainment would be a welcome addition

The Mercedes-Benz User Experience infotainment system is a feature that’s foreign waters for the MPV segment. The infotainment interface can be manipulated via touch-sensitive controls on the screen, satellite controls on the multifunction steering wheel and through voice activation. The system’s AI is also able to learn and predict your next move on MBUX, whether you listen to Gqom right after the 9:00 traffic updates or if you call home at 17:00 in traffic every Friday to check with your partner where you’re eating out.

The new Mercedes-Benz T-Class is expected to make its global debut in 2022.