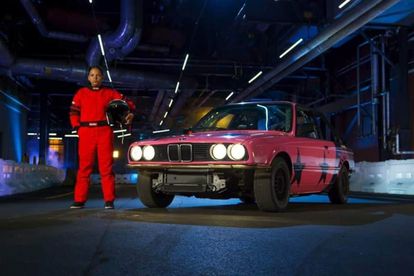 If Stacey-Lee May was a car, she’d be the car of your dreams — the shiny one with all the neat features and trimmings, the one with high velocity and power, able to climb mountains and cross rivers.

May, just 24 -years-old from Eldorado Park in Johannesburg, is recognised as a professional car spinner and stunt driver. Known as the motorsport which originated in South Africa’s townships, spinning is essentially swerving your car in circles at high speeds, while performing stunts in and out of the car.

Bullied in high school, she took refuge in motorsport and has made a name for herself in the industry. Whoever said women can’t drive, hasn’t met the Queen of Smoke.

STACEY-LEE MAY BRINGING THE FIRE

When we say there’s fire, we mean Stacey-Lee May is an astounding Jack of all trades. Not only is she paving the way for motorsport in South Africa, but she’s also studying law, with just one year left to go.

One wouldn’t necessarily put law and spinning together but May has made it look extremely appealing. When asked how she got into motorsport, she said her dad saw it as a way to boost her confidence. Little did they both know, it would lead to opportunities of a lifetime.

Since she took the wheel at a young age, May has been participating in spinning shows and documentaries all over the world. She has made appearances on shows like So You Think You Can Spin, Top Gear SA, and The Grand Tour. She has also starred in Hyperdrive on Netflix with South Africa’s very own Charlize Theron.

May, who drives a pink and grey BMW E30 325i, revealed that the colour of her car is there for good reason.

“My car is pink and grey to represent breast cancer awareness as my grandmother passed away battling breast cancer,” she said.

HOME IS WHERE THE HEART IS

Like the saying goes, charity begins at home, and May known to her family as Staca is living testament to that. If she’s not studying online, she said she would usually be helping her mother at work.

She’s also no stranger to giving back to her community. In an interview on Kaya FM, she said she previously hosted soup kitchens, as well as, blanket drives in Eldorado Park to help those who were less fortunate.

On Wednesday 26 August, a Down Syndrome teenager by the name of Nathaniel Julius was allegedly gunned down by police in Eldorado Park. May said the incident “hit [her] hard” and was extremely sad and unfortunate.

“My heart goes out to his family,” she said.

When asked which woman inspires her, May didn’t hesitate, saying; “My mom definitely influences me because she is such a hard-working woman with a heart of gold. She is my inspiration”.

The eldest of three children, May said her main goal above all else, is to make her family proud and to make sure they are comfortable.

Seeing women behind the wheel in motorsport is few and far between. When asked what extra hurdles she had to overcome being a female in a male-dominated industry, May had a positive outlook.

“Being a woman in motorsport is tough, as people always underestimate you. New hurdles come all the time but I just keep a positive mind and do what I do best,” she said.

Stacey-Lee’s message to women, as the month of August draws to a close is; “keep your head up high and do your best. Don’t allow negativity to dictate who you should be, you are a strong independent woman that can do wonders”.

Looking to the future, she said she would love to complete her studies, travel the world and show people what she has to offer. It’s only up from here and we can’t wait to see what she’ll do next.