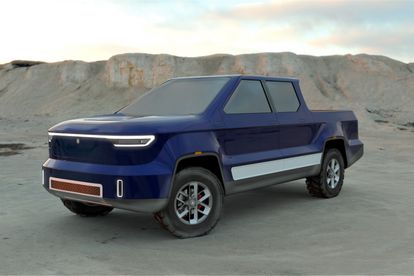 Stand back Elon Musk – another South African has been quietly plugging into the electrical vehicle market with big plans to produce the country’s very first “battery bakkie”.

And while he is not quite ready to tussle with Elon Musk’s Teslas just yet, Johannesburg’s Nhlanhla Mazibuko appears to be well on his way to developing the first working prototype of his electric pick-up — the M1B.

Confidence and the calibre of the new bakkie on the block

Exhibiting big ambitions and matching confidence, the young entrepreneur and founder of the Mazibuko Motor Company (MCC) has already created a ‘waiting list’ section for prospective new owners on the company’s website.

And what they will be signing up for is a battery-powered bakkie with a range of 400km and a power capacity of 500kW.   This will be split in two 250kW motors located at the rear and front of the vehicle respectively. According to the company, the vehicle will be designed to reach 100km/h in under five seconds and will produce 1300Nm of torque.

Buyers will also get to own a rather uniquely South African-flavoured vehicle badge or logo which resembles an encircled, traditional African shield arrangement with the diagonally intersecting lines hinting at the usual spear and assegai placement behind it.

A vertically placed and diagonally running lightning bolt dominates the centre of the shield.

Work on the prototype – which appear in images of the double cab concept vehicle posted on his website – is expected to begin in earnest from June this year.

Mazibuko told Business Insider that he had been frustrated by “South Africa’s slow adoption of electric vehicles” and had opted to pioneer and develop his own. His Vaal-based business is described as a battery electric and technology company which opened shop in June 2020.

With the concept phase for the development of the vehicle having recently been completed, Mazibuko revealed that he had opted to build a bakkie because of the popularity and demand for the vehicles in South Africa.

He also believes building bakkies is a good financial proposition.  The entrepreneur told Business Insider that pricing for the model would be based on factors such as battery prices and the location of the vehicle factory – but his plans are to produce an affordable model.

Mazibuko said the platform had been developed internally after first having considered piggy-backing on an existing OEM or supplier and concluding they would have more control and flexibility should MCC be able to produce its own.

“Having a modular and scalable battery-electric platform allows us the ability and freedom to develop and bring more models to market quickly and at a fraction of the cost. We see this platform as a gateway to bringing models to market whether it’s Sport Utility Vehicles, minibus taxi, or a hot hatch,” the company said on its website.

Alliances and the road ahead

MCC said it has already teamed up with the MIH Alliance, the open source platform established by Foxconn – the company which makes Apple iPhones.

Mazibuko is hoping its MIH EV platform, which other electric car makers can use to develop their own vehicles, will help invigorate the EV market.  The alliance has other high-profile members, such as Amazon and Microsoft.

An overriding objective for MCC and Mazibuko, who first started the project in 2019 and went on to found his company in 2020, is to make a positive contribution to the environment and ultimately a carbon emission-free transport system in South Africa.

While Mazibuko is steadily building alliances and a supplier base for the project, he is also actively targeting crowdfunding and investor contributions to fund the development of the model.