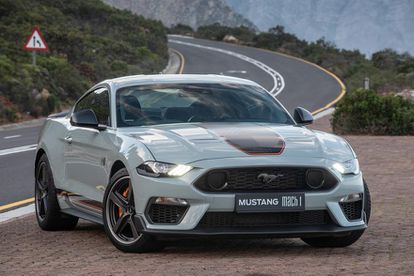 It’s no secret that the Ford Mustang Mach 1 is an iconic vehicle that has represented Ford’s bold approach to design and performance since its debut in 1969. The Mustang has been a firm favourite among South African motoring enthusiasts, and they will be excited to know that the Ford Mustang Mach 1 has arrived in the country – and there are only 90 units to be snapped up.

The new Mustang Mach 1 pays tribute to the original, iconic 1969 version – but it brings with it the modern design and performance attributes that have helped make the current-generation of Mustang the world’s best-selling sports car.

A specially calibrated 338kW version of the 5.0-litre unit in the Mach 1 will make the hair stand on end, and its unique transmission specifications, bespoke aerodynamics, and new performance component cooling systems allow for greater agility and consistent on-track performance.

The Mustang Mach 1 can go from 0-100 km/h in 4.4 seconds with increased downforce for enhanced cornering capability and high-speed stability.

“There’s a reason Mustang is the world’s best-selling sports car, but the Mach 1 elevates Mustang to another level in the hearts of performance car fans,” says Doreen Mashinini, General Manager for Marketing at Ford South Africa. “Road or track, this is the most capable Mustang yet, and is more than worthy of carrying the legendary Mach 1 badge.

“A true Mustang Mach 1 needs to look fast even standing still,” Mashinini says. “The functional aerodynamics and exclusive race-inspired features of the Mach 1 will leave performance car fans in no doubt that this Mustang means business – even before it hits the track.”

For the first time on a production Mustang, the TREMEC six-speed manual gearbox is derived from the Shelby GT350. Also available is Ford’s advanced 10-speed automatic gearbox, featuring an upgraded torque converter and unique calibration.

The Mach 1 comes with unique five-spoke 19-inch alloy wheels which are 0.5 inches wider at the rear, and fitted with Michelin Pilot Sport 4 tyres for outstanding grip on road and track.

‘Nobody knew who Senzo was’: Kelly Khumalo angers tweeps [watch]