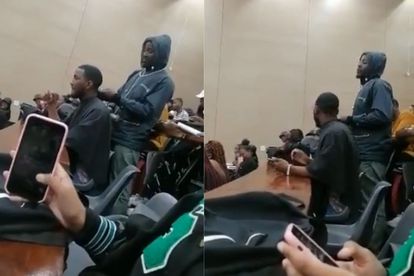 YouTuber King Oumar has been blasted for getting a haircut during a lecture at the University of Johannesburg. Images via Twitter @bonganiii_

YouTuber King Oumar has been blasted for getting a haircut during a lecture at the University of Johannesburg. Images via Twitter @bonganiii_

Youtuber and influencer King Oumar is known for his quirky content and pranks but a recent video did not go down well with social media users. The YouTuber, who is an accounting student at the University of Johannesburg, disrupted a lecture to get a haircut during class.

In a now-viral video posted by@bonganiii_ on Thursday 28 July, King Oumar brought his barber along to his university lecture for a haircut but the lecturer was not very pleased. The lecturer bemoans the YouTuber saying his actions were “unacceptable”.

The lecturer kicked King Oumar and his barber out of the class and continued on with her lesson. The video has since received more than 200 000 views on Twitter.

Reacting to the video, tweeps were not happy with King Oumar’s prank and some called for the YouTuber to be suspended from the university.

“I’m actually so angry at this. It makes me so angry. To think how high university fees are only for someone to do this in class,” wrote one tweep.

“UJ should suspend this idiot,” wrote another tweep.

“How are people finding this funny?? It’s purely disrespectful.”

“This is disrespectful and I hope the university will take serious measures against him. He’s wasting other student’s time and being disruptive,”

In one of his YouTube videos, the content creator looks for other students on campus and cuts their earphones before surprising them with headphones.