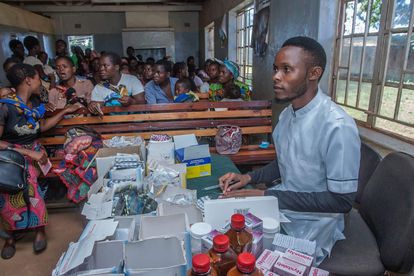 A nurse waits to administer treatment to sick children at the beginning of the Malaria vaccine implementation pilot programme at Mitundu Community hospital in Malawi’s capital district of Lilongwe, on 23 April 2019. Photo: AFP/Amos Gumulira

A nurse waits to administer treatment to sick children at the beginning of the Malaria vaccine implementation pilot programme at Mitundu Community hospital in Malawi’s capital district of Lilongwe, on 23 April 2019. Photo: AFP/Amos Gumulira

Malaria is still a growing concern. Urgent action is needed to get the fight against malaria outbreaks back on track.

As reported by the World Health Organization (WHO), the estimated number of malaria deaths “remained virtually unchanged over the previous year.”

A child dies of malaria every two minute. More than 200 million cases are reported each year. And even though the spread of the disease is on the rise, these deaths can be prevented.

There are large gaps when it comes to access of core tools to fighting, detecing, preventing and treating malaria. However, funding for the fight against malaria remains mostly unchanged.

In 2017, only $3.1 billion was available for global malaria control and elimination programmes. This was well below the Global Technical Strategy (GTS) funding target for 2020 of $6.6 billion.

In addition to funding, strategic information is needed to drive impact, as well as a coordinated national malaria response, and better guidance when it comes to policies and strategies.

Furthermore, new chemical formulations to mitigate the threat of insecticide resistance are under development, as are new strategies to improve the delivery of treated nets and indoor spraying.

That brings us to the second key message.

This includes better guidance, policies and strategies, as well as a political will to reduce malaria deaths. Leaders in malaria-affected countries need to turn their political commitments and promises into tangible actions.

Senegal launched the Zero Malaria campaign five years ago. The African Union Summit by all African Heads of State endorsed the campaign in July 2018.

In essence, political leaders need to step up. Especially those who control government policy decisions and budgets. A country will thrive when private sector companies benefit from a malaria-free workforce.

Empower communities to take ownership of malaria prevention and care

Some countries with a high burden of malaria are also making significant strides in reducing their burden of the disease. That is not enough.

In the 10 African countries hardest hit by malaria, there were an estimated 3.5 million more cases of malaria in 2017 over the previous year. These ten countries are:

To that end, the “zero malaria starts with me” campaign should engage all members of society.

World Malaria Day: What Africa still needs to do to eliminate malaria

Heading to a region with malaria? Some simple steps to keep you safe