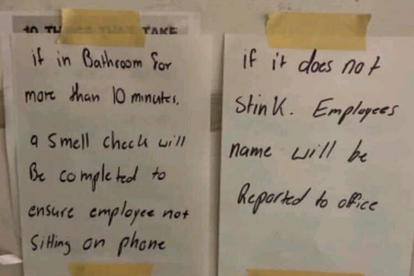 Social media users have not stopped buzzing over an office place’s bathroom rules which were posted online. According to the notice that was placed on the bathroom door, the toilet will be sniffed for a stinky smell if an employee spends more than 10 minutes there during office hours.

Many could not believe the audacity of the office’s management and called the entire thing disgustingly “invasive.”

A truly cringeworthy bathroom notice was placed on a bathroom door at an unknown US office and judging by online comments, many just could not believe it.

Photos of the bathroom notice were posted on Twitter by a user with the handle @JoshuaPotash on Sunday 20 February and were captioned:

“Nah this is one of the most invasive things I’ve ever seen.”

The notice reads that if an employee spends longer than 10 minutes in the bathroom, someone will go into the bathroom and do a “smell check” and if it doesn’t stink, the employee who was in there will be reported to management.

View the notice below:

The post did not sit well with many social media users who felt both repulsed and shocked that any business owner would allow such madness at their workplace.

Many of them also felt bad for the person who was in charge of doing the smell checks.

“We can’t actually be free until we control the spaces where we spend like half our waking hours. Workers should control workplaces, not weird owners who don’t want people taking breaks in the bathroom and want managers to sniff people’s dumps.”

“Imagine sniffing people’s dumps being part of your job description. No wonder we’re in the middle of the Great Resignation.”