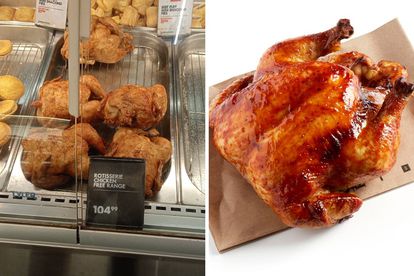 Woolworths have increased the prices of their rotisserie chickens once again.
Image via Twitter

Woolworths have increased the prices of their rotisserie chickens once again.
Image via Twitter

The prices of petrol, oil, electricity, and pretty much everything have had South Africans feeling down in the dumps in recent months. But if you’re hoping to console yourself with a Woolworths rotisserie chicken, you may have to dig a little deeper into your pockets…

That’s because the popular ready-to-eat meal has had another price increase, leaving consumers angry and annoyed.

ANOTHER PRICE HIKE FOR ROTISSERIE

Just a few short weeks ago, the price of Woolworths’s rotisserie chickens had many South Africans up in arms.

But Woolies has done it again, taking the price up to R104,99 for an oven-roasted ready-to-eat meal.

The price increase was made public by a Twitter user who posted: “F**k petrol and electricity prices. S**t just got real! Woolies rotisserie chickens just hit the R105!”.

And needless to say, tweeps did not take the news kindly. Here’s what they had to say:

@Olwen76781234: “While some people pay that price, the price will keep rising. Time to boycott Woolies”

@PappaNeil: “I chickened out on that a long time ago”

@JamesSpies12: “Is Woolies claiming to be importing chicks from Ukraine?”

@Poela83: “That rotisserie chicken went to a private school”

Meanwhile, the SA government has suspended tariffs on imported chickens in a bid to ease the rapid food price increases.

According to IOL, due to SA’s high demand, at least 10% of chicken consumption is imported into the country. However the imported meat, particularly in Africa,  is known as “chicken dumping” as the product is “dumped” below the cost of production.

The chicken – “discarded brown portions” – are “are usually dumped at knock-off prices, cheaper than the cost to produce in their respective homelands”, adds the publication.

But not everyone is happy – local breeders claim the reduced cuts will result in a loss of jobs and production.