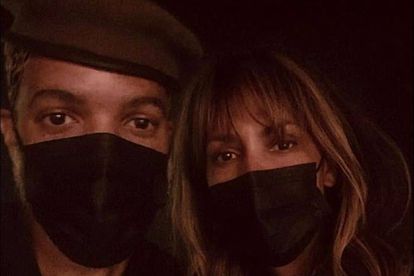 ‘#MasksSaveLives’: Halle Berry poses in face mask with new beau Van Hunt as she encourages her fans to cover up during pandemic. Image via Facebook @HalleBerry.

‘#MasksSaveLives’: Halle Berry poses in face mask with new beau Van Hunt as she encourages her fans to cover up during pandemic. Image via Facebook @HalleBerry.

Halle Berry and Van Hunt have been dating for a few months now and the pair recently went Instagram official.

This is a big deal for the X-Men star as Berry tends to keep her relationship status very private, but she has been glowing in social media happiness with Van Hunt.

The actress had been posting hints of her new relationship for a while without any tags or mentions of the then mystery man.

In September — when it was reported that Berry’s directorial debut, gritty drama Bruised, in which she also stars, had been sold to Netflix for a rumoured eight-figure sum — the star posted a picture of herself wearing a T-shirt that had Van Hunt’s name on it, tagging him with the caption “Now ya know” with a heart and foot emoji.

‘The chemistry is through the roof’

She has two children, daughter Nahla, 12, with ex-boyfriend Gabriel Aubry, and son Mateo, six, with Martinez.

However, her chemistry with Van Hunt is described as “through the roof”.

An insider told US Weekly: “She’s had some negative experiences [with men], but Van has taught her to love again — and love herself”. The source added: “He’s a wonderful, caring man. Their chemistry is through the roof.”

So, who is Van Hunt?

Besides the title of “Halle Berry’s new boyfriend”, here are five things you need to know about Van Hunt.

In 2007, he won a Grammy Award for Best R&B Performance by a Duo or Group, providing the vocals for the Sly and the Family Stone song Family Affair.

Hunt also has several albums to his name and he has collaborated with stars, such as John Legend, Joss Stone, Dionne Farris and more.

He is also multi-talented: He sings and plays several instruments, such as the guitar, bass, drums and keyboard.

The musician was born on 8 March 1970 which means he turned the big 50 this year. This makes him four years younger than Halle Berry who turned 54 in August.

His son turned 18 this year and his name is Drake Hunt.

Hunt likes to live a private life and does not often speak about his personal life. However, in a 2011 Interview with Xappeal he spoke about how much fun it is to have a son.

4. He has his own record label

Back in 2011, Hunt started his own record label called Godless Hotspot on which he released two of his albums — What Were You Hoping For and The Fun Rises, The Fun Sets.

5. He hails from Ohio

He was born in Dayton, Ohio, and he was raised by a single mother. He moved to Atlanta, Georgia, in 1996 to study English at The Morehouse College but he dropped out and started producing hip-hop demos for Atlanta rappers.