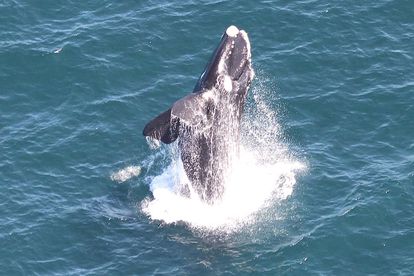 When you see a mighty southern right whale waving its fluke in the ocean and sending up plumes of water as happens each year in the Western Cape, it takes your breath away.

In any one season, as many as 200 whales head for the continent although numbers fluctuate year-on-year.

Waiting for the mum-to-be

This year I am hoping for the arrival of a possible mum-to-be, Thembe, which I adopted last year during a whale-adoption programme launched in Hermanus to support much-needed research.

According to her adoption certificate, Thembe was born in 1985 off the de Hoop nature reserve and has quite a history. She is the daughter of a female identified in 1979 as the third southern right whale to be identified in South African waters. Thembe was six when her first baby was born and has returned to calve several times since.

The fascinating thing about all this is that ever-evolving technology means that every female southern right whale that migrates to the protected waters of southern Africa, as well as the males and non-calving females that accompany them, can be identified thanks to a computer assisted eye recognition system, which helps build up a history of individual whales.

Explaining the nuts and bolts of the research project, now in its 51st year, is Dr Els Vermeulen of the Whale Research Institute at Hermanus who believes that there are too many unexplained events happening in the ocean territory to overlook the southern rights.

“We see big fluctuation and need to know if something is amiss. Preliminary data indicates that below optimum feeding conditions are resulting in poor energy levels, which in turn impacts on migration,” she says.

In eight or so weeks’ time, scientists like Vermeulen will be waiting for the news that the whales have started their long journey south. Aerial equipment will not only monitor their journey but record them in such detail that distinctive colouration and markings are clearly visible.

“For the first time,” says Vermeulen, “this coming whale season we will have a huge amount of knowledge about population size, food sources and movements as well as the numbers of southern rights we can in the future.”

My hope is that Thembe will be among those new arrivals.