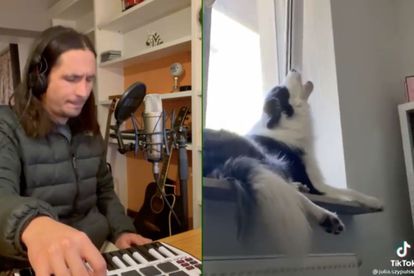 Cape Town musician The Kiffness has ventured into the relatively obscure genre of feline-focused live looping in recent times, but the artist hasn’t forgotten about his dog-loving fans and released his latest track Am I a Good Boi on Thursday 16 August to level the playing field.

Featuring the ethereal voice of Opera Dog, The Kiffness pushes unchartered lyrical and sonic boundaries, asking the age-old, titular question that perpetually haunts our canine allies with thoughtfulness and vulnerability.

Here’s the new track by The Kiffness and Opera Dog:

Watch the latest Kiffness track below:

The collaboration with crooner canine Opera Dog is a stroke of genius – and fans were unanimous in their opinion that the dog on display is without a shadow of a doubt a “good boi”.

“You can really hear the pain in Opera Dog’s voice. He must have been through a lot. Great song,” said Hein Bosman, a fan on Facebook.

“Come on doggie people let’s knock that cat for six and get many many more likes for the dog,” said another.

While many people got stuck into the track after its release on Thursday, some encountered some backlash from their own furry friends.

‘Oops, sorry I had to stop this after 22 seconds. My dog was looking all around for the dog,” said another fan.

The Kiffness has shared the stage with a host of feline frogmen of late, with Alugalug Cat and Big Billie just two of the names that appear on his latest EP – Cat Jams. In recognition of their contributions, the artist – whose real name is David Scott – has pledged to donate 50% of all streaming revenue to his local SPCA (Sandton SPCA).

“We went to go visit them yesterday. They do fantastic work & I hope this EP helps them out,” he said. “If you’d like, you can make a direct donation to them here.