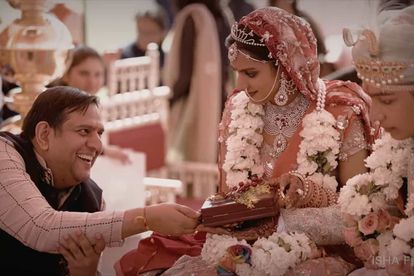 The Gupta family wedding at the Emirates Palace in Dubai / (Photo: YouTube screenshot)

The Gupta family wedding at the Emirates Palace in Dubai / (Photo: YouTube screenshot)

One could easily confuse this Gupta family wedding extravaganza for a music video cut right out of a Bollywood production.

While the embattled family’s South African business affairs have left thousands of workers in tatters, their lives in the United Arab Emirates have been nothing short of glamorous.

As reported by AmaBhungane, the family’s recent five-day wedding celebration took place at the Emirates Palace, one of the world’s most luxurious and expensive hotels.

AmaBhugane caught wind of the wedding invitation and calculated that the whole affair cost the embattled family an estimated R100-million.

Meanwhile, in South Africa, at least eight of the Gupta family’s businesses have either gone into business rescue or have been liquidated.

A stack of financial problems for Guptas in South Africa

Oakbay Investments is currently being sought by business rescue practitioners, Kurt Knoop and others, for monthly debt payments of R150 000 that stretched back to 2013.

Another one of their subsidiaries, Tegeta Exploration and Resources, which owns Optimum Coal Mine, Koornfontein Mines, Optimum Coal Terminal and Shiva Uranium, is also in business rescue, has yet to settle a debt bill to the tune of at least R4-billion.

Atul and Tony self-exile in luxury

Atul and Tony, both currently self-exiled in Dubai, made brief cameo appearances in the montage that was compiled by Isha Films. The two brothers have legal representation in the ongoing Zondo commission of inquiry into state capture.

However, they have made it clear that they are unwilling to appear before the commission to test the damning evidence that we have already heard from highranking government and private sector officials.

Their reason? They do not trust the Hawks or the National Prosecuting Authority (NPA).

Well, as the two brothers saw off their children as they entered into a phase of their lives where trust will be a key factor in their respective marriages, many South African workers who were employed by the family have yet to receive a dime from them.