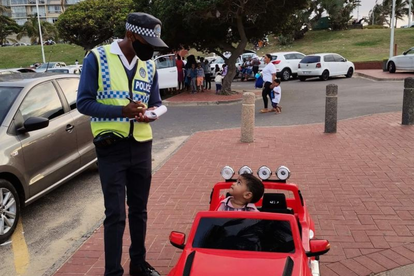 We could all do with a feel-good story every once in a while. If the news cycle is getting you down, then this image of a Durban toddler receiving a “traffic fine” will cheer you right up.

The toddler is stealing hearts across the country this week after SABC News reported the one-year-old Ziyad Hanif became “one of the youngest drivers ever to have had a brush with the law”.

Ziyad’s red toy car was a birthday gift. However, his first trip out and about resulted in disaster when the law caught up to him and his paths crossed that of a Durban Metro Police officer.

His mother, Lamess Hanif, snapped the adorable photo of Ziyad receiving his first “traffic fine” on social media. She explains that her initial post on Facebook was “shared lots of times. She adds:

“I didn’t expect this picture to go viral. I think what melts a lot of hearts was the look on his face and that of the policeman.”

Did fame change him? Not at all.

In the clip below, his mother explains to him that he’s famous and how does he feel about it. He seems happy about it, though. Watch the cute interaction here. Other than cars, he also mickey mouse and being around his older sister.

Lamess said it “warms [her] heart to know that this picture brought lots of smiles to many faces especially during this sad time, during the pandemic”.

The reactions on social media are just as entertaining. One netizen joked that little Ziyad was “blasting music in the wrong place”, while another added that the “this one was without a licence, you can see his faces says it all”.

Another Twitter user guessed that the fake fine citations include “No plates, no disk, no license, no ID, is on pavement, doesn’t answer questions”.

[A feel good story for your timeline] A tiny tot in Durban has been trending on social media after becoming one of the youngest drivers ever to have had a brush with the law, so to speak.
Lookout for the story on #sabcnews pic.twitter.com/X9EWuzgGbT

Step out of the car.

On his way to become president.