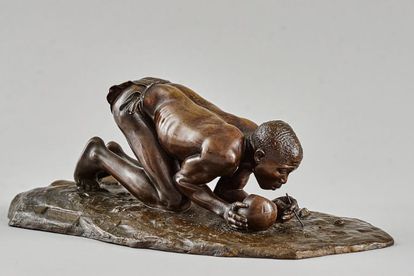 The sculpture was donated by the artist as a raffle prize to raise funds for the Dutch Relief Fund during World War 2. Tickets cost one shilling (10 cents). At the time the sculpture was valued at 60 pounds. It is expected to fetch in excess of R350 000 on auction this November.

Van Wouw was born in Holland and studied at the Rotterdam Academy, moving to South Africa in 1890, so was sympathetic to the fund’s cause. The Dagga Smoker has remained in the hands of the Holloway family, who won the raffle, ever since.

“I well remember the little shop in the old African Arcade which the Dutch Relief Fund had rented for their fundraising,” wrote Jack Holloway in 1999 in a letter recording the provenance of the work. Holloway was a boy of 12 or 13, shopping with his mother, Tienie, when she bought the winning ticket.

Tienie was an Afrikaans children’s poet married to Dr Jack Edward Holloway Sr, who was the Secretary of Finance from 1937 to 1950. He went on to become the South African ambassador to the United States and the High Commissioner to Britain. The Dagga Smoker went with the Holloways to Washington and London respectively.

The Dagga Smoker is among Van Wouw’s smaller works most recently and comprehensively explored at an exhibition at the Everard Read Gallery in 2009, shortly after the publication of Anton van Wouw: The Smaller Works by A.E. Duffey.

“Van Wouw was very fond of this figurine and considered it his best work,” wrote Duffey. He certainly lavished time and attention on it, working on the sculpture for nine months during 1907. A few years later the political cartoonist D.C. Boonzaier (father of artist Gregoire Boonzaier ) recorded a visit to Van Wouw’s studio in Doornfontein in his diary. Among other observations on 27 July 1914, he wrote: “Van Wouw seems to regard the ‘The Dagga Smoker’ as … one of the best things he has done…”

Despite its small size, the exquisite details and finely textured finishes on the work, particularly apparent on the hair, fingernails and wrinkles on skin, not to mention the closely observed posture, expression and composition of the work, mark it out as one of Van Wouw’s finest.

Holloway’s letter records that “[t]he specimen of the Anton van Wouw Daggaroker in possession of the Holloway family since 1942 or 1943 is cast by G. Massa of Rome. (The first number of casts were done for van Wouw by Nisini in Italy. Subsequently he had further castings done by Massa.)” Nisini and Massa were indeed Van Wouw’s preferred foundries, and the finish on the examples cast by them in Van Wouw’s lifetime is far superior to anything attempted subsequently. Duffy’s monograph includes an illustration of a Massa casting of the Dagga Smoker on page 61.

“Not only is its provenance unique in that it was given by the artist for the cause of the country of his birth, but it is arguably also the last of the casts to have been finished by van Wouw’s own hands,” writes Holloway. “I say this with come confidence as it is on record that his health failed in early 1944 and that, although he still attempted new projects, he had not the strength to complete any.”

Duffey notes that few castings were made, largely because of the high price of casting this larger version of the Miner with Hand Drill. 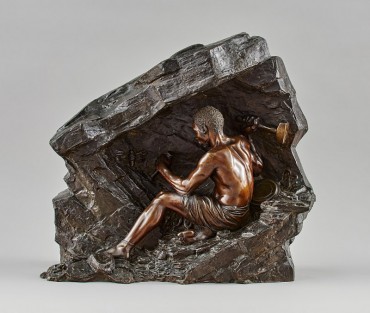 He considers this work at length and in quite some detail in of Anton van Wouw: The Smaller Works. He writes: “It is remarkable to see how many differences there are between the finer details of the best Massa and Nisini castings and local creations.

“In this regard special attention should be called to the hammer which is more prominent in the Italian castings, the cord of the water bottle which is clearer, the more accurate rendering of the rockface and the loincloth of the miner and the emphasis on detail such as the string around the left foot of the miner, the way that the top of the chisel has been damaged by the continual hammering, the finish of the skin on the heels and feet of the miner, and the portrayal of the hands.”

Strauss & Co managing director, Stephan Welz, notes, “You can see Van Wouw’s finger marks in the moulding, the tiniest of toe nails and the rippling muscles of the seated figure.”

Duffey also draws attention to the “patination and the textural contrasts” on the finish of the piece, particularly the darker colour and rougher texture of the rockface compared to the smoother, lighter body of the figure.

“It is quite phenomenal in terms of craftsmanship and detailing and confirms why Van Wouw was considered the father of South African sculpture,” adds Welz.