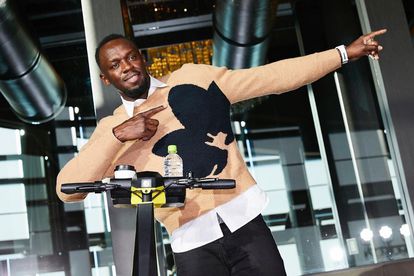 Who would’ve thought that the fastest man in the world would ever step into the music studio? Usain Bolt took to his Instagram to express gratitude for all the support he’s received for his music. Bolt shared that he has a few aspirations for his music career!

ALSO READ: Usain Bolt is a father to twins! Check out the adorable names – and pictures

Usain Bolt retired from the athletics track in 2017 and has since dabbled in a few different things. He launched his own e-scooter brand, Bolt Mobility, and had a brief career in soccer.

He released his first project as a producer, Usain Bolt presents Olympe Rosé riddim, in 2019.

Bolt’s first single of the year, Living The Dream featuring his manager NJ, has raked in over half a million YouTube views. The song is a dancehall number and Bolt certainly knows how to get your hips moving with this one!

He told Business Insider earlier this year that he hopes to collaborate with one-third of hip-hop group Migos, and says the two have already begun talking about their collaboration.

“Over the Super Bowl weekend, we actually met with Quavo to discuss going to Los Angeles, to just feel the vibe and see if he wanted to do something together. It’s something we are working on.”

The 100m world record holder further mentioned that they are taking their time with it and they’ll see what the best direction to take will be. Bolt has big dreams for his music career and says there are no limits to what he can do!

“I’m aiming for the top, you know what I mean? I want to get as many No. 1s as possible, I want to win a Grammy, get ‘best album’”, the star athlete said.

ALSO READ: Steve Jobs’s daughter Eve is working her way up WITHOUT an inheritance

Usain Bolt released It’s A Party on 9 July and expressed gratitude on his Instagram page about how the song has been received.

Bolt recorded the short video with his manager NJ. “Continue showing us love”, he said. The athlete also urged everyone to go listen to the track.