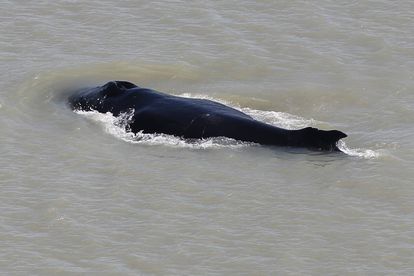 Wildlife authorities and marine experts in the remote Northern Territory of Australia say they are “thrilled” and “stunned” by the discovery of three humpback whales swimming in a Kakadu National Park river.

Locals say it is the first time this is known to have happened and one newspaper in the region, known as the Top End, is calling it a “once in a lifetime event”.

Kakadu River is full of crocodiles

The East Alligator River is a wide swathe of water that flows into the Timor Sea and is known to be infested with crocodiles.

However, experts believe there is minimal chance of any conflict between the two. While the crocs may get the ‘hump’ at having intruders in a body of water where they have reigned supreme for thousands of years, they are likely to steer clear.

“It’s not something a crocodile would even be capable of attacking. It’s just way out of a crocodile’s world,” said Dr Carol Palmer, a marine ecosystems scientist at the Northern Territory Department of Environment and Natural Resources.

Two whales have now headed off

Two of the three whales originally spotted are believed to have now left the river and headed out to sea again, but one whale still remains.

Scientists are concerned that it may become stuck if it continues swimming upstream and are monitoring the situation closely.

Rangers in the Kakadu National Park have set up an exclusion zone around the whale, both for its safety and that of boaters who use the river.

“It’s not something that boaties will expect heading up the river; encountering something that’s probably 40 tonnes and 15 metres or so [long],” said the park’s Country and Culture Manager, Feach Moyle.

“Striking that animal at speed would end in a bad day for someone.

“And the last thing we want is the animal being scared further upriver, where it might become stranded on a bank or a sandbar. So we’ll keep the exclusion zone until hopefully, best-case scenario, the whale heads back out towards the ocean,”

Scientists are stumped as to the reason

Dr Palmer said scientists did not know why the animals swum upriver.

“It is really unusual for this to happen. It’s just never been recorded before, a 16-metre humpback whale up a river in Kakadu National Park,” she said.

“At this time the whales are heading south to Antarctica to feed during the summer. And we are not sure why these whales took a wrong turn.”

Eben Etzebeth: Marrying Anlia will be my biggest achievement!

WATCH: BLUE Water runs from a tap in Johannesburg [Video]