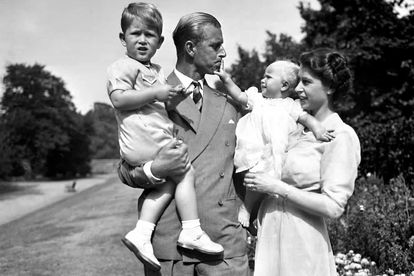 Princess Anne in the arms of Princess Elizabeth, with the Duke of Edinburgh, holding Prince Charles, in the grounds of Clarence House, their London residence. Photo: PA Images RealTime Images

Princess Anne in the arms of Princess Elizabeth, with the Duke of Edinburgh, holding Prince Charles, in the grounds of Clarence House, their London residence. Photo: PA Images RealTime Images

The images, letters, manuscripts and personal effects are part of the du Maurier Collection, relating to the late Daphne du Maurier and her husband, Lieutenant-General Frederick “Boy” Browning.

Lieutenant Browning, was a close colleague of Lord Mountbatten during World War II and was asked to work for the Royal family on his return home, hence the family’s possession of the photographs.

The photos are not dated, but experts believe they date to shortly after the war, or after Queen Elizabeth’s Coronation in 1953. Most of the images were taken at Balmoral Estate.

It is assumed that Browning took the photos. It was discovered in the Du Maurier’s archives after Daphne’s death, including a letter written by Daphne shortly after the Queen visited her and Browning in Cornwall in 1962.

Apart from photos showing the Queen and Prince Philip enjoying a garden picnic, a young Prince Charles and Prince Anne can be seen on the deck of a yacht, assumed to be the Royal Yacht.

Browning and his wife had three children, and Daphne passed away in 1989 in Cornwall. The auction commemorates the 30th anniversary of her death.

Rowley’s Managing Director Roddy Lloyd said: “This is a huge archive and we are still going through letters and photographs and making discoveries. These particular images, which show the Royal family in an off-guard, relaxed mood highlight the circles in which du Maurier and Boy moved.”

According to Rowley’s Auctioneer’s website, Browning died in 1965 and is said to have had affairs with both men and women.

The auction will take place on 27 April, and the collection is expected to attract interest from buyers around the world. Live online bidding is also available.