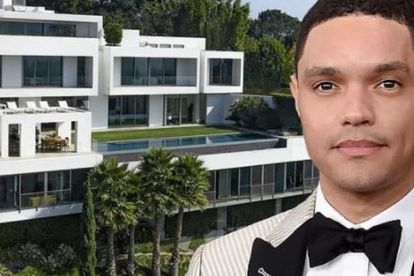 Trevor Noah will spend 2021 in style.

Just before New Year’s Eve, The Daily Show host shelled out a whopping $27.5 million (R423 million) for a contemporary mansion in Bel Air, the LA Times has confirmed.

It appears the stand-up comedian has a thing for architectural showplaces.

Another year, another mansion for Trevor Noah…

In 2019, he splashed out $20.5 million on a similarly dramatic mansion also found in Bel Air, but offloaded it last summer for $21.7 million.

ALSO READ: Trevor Noah and Minka Kelly spotted house-hunting in the US

Noah, who will be hosting the 2021 Grammy Awards in March, bought this modern mansion — which sits atop a hill — from Mark Rios, an LA architect who built the 11,000-square-foot home for himself.

Inspired by Japanese aesthetics, Rios told Architectural Digest previously that he went through 50 plans before settling on the final design and employed dark timbers based on a room he saw in Kyoto and extra-thick walls to protect against the noise of the city below.

From the street, the home appears as a series of cubes stacked together.

Aerial photos from the back reveal that the estate sprawls across its hillside lot with a series of open spaces that adjoin or overlook a scenic backyard with a lawn and infinity-edge pool.

Stone, wood, bronze and glass combine in the common spaces including a spacious dining room and a lounge with custom wall coverings.

At the top, a movie theatre leads to a rooftop terrace.

A cabana with a bar and sun deck adjoins the pool out back.