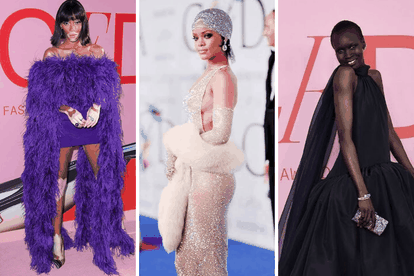 The past decade has given us so many memorable fashion moments at the annual Council of Fashion Designers of America awards.

Fashion fans are starving for visuals with major fashion events and award ceremonies such as the MET Gala being postponed due to the COVID-19 global pandemic.

Sadly, it was no surprise that the Council of Fashion Designers of America (CFDA) would also postpone their prestigious fashion events such as the New York Fashion week and the CFDA awards.

The CFDA is reviewing all upcoming dates but, like the rest of the world, its priority is to protect its team’s health and wellness and stabilise business operations.

In the meantime, let’s look back at the top 10 most memorable past red carpet moments from the CFDA awards.

Ashley stunned in this black number by Christiano Siriano at the CFDA awards in 2019. The plus-size model brought old holiday glamour back to life with jewellery over her gloves and hat accessories.

Supermodel Gigi stepped out in this rainbow jumpsuit by Versace. She finished the look off with bright red lips.

JLo is known for always making a statement on the red carpet, and the I’m Real hit maker didn’t fall short at the CFDA awards in 2019. Jenny from the Block stopped the show in a bright Ralph Lauren two piece and she was honoured as a style icon that evening.

Discovered in the 1980s, British supermodel Naomi Campbell has had best and worst red carpet moments for decades. The red tasselled Calvin Klein dress she wore at the 2019 CFDA awards was a definite win.

Keeping Up With The Kardashians reality TV series star, and now model, Kendall Jenner has grown into her own. Draped in a feathered gown by Alexandre Vauthier, the child star gets a fashion icon stamp of approval.

Winnie Harlow also pulled out all the stops in this purple plum number by Christian Siriano, with a feather boa built into the dress. She paired it with colourful pumps and a matching ring.

Queen Bey’s fashion sense also never ceases to amaze. The recipient of the 2016 CFDA Style Icon award, Beyoncé arrived at the awards in a shimmering suit by Givenchy, paired with what might be most famous accessory, the “formation” hat.

This  was part of her regalia throughout her Lemonade album era.

The most controversial red carpet moment might have been when popstar Rihanna arrived at the 2017 CFDA awards in a sheer, see-through, Swarovski embellished dress with matching headscarf. The style icon made one of the red carpet fashion moments of the decade.