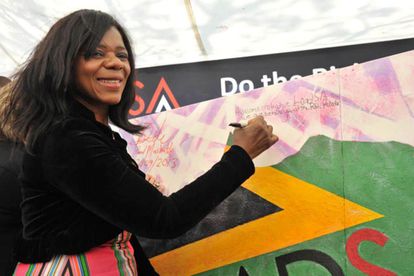 Though we are more used to seeing her immaculately dressed, Thuli Madonsela is putting her hiking boots back on for a good cause. Image: GovtFlickr

Though we are more used to seeing her immaculately dressed, Thuli Madonsela is putting her hiking boots back on for a good cause. Image: GovtFlickr

Prof Madonsela, who is the chair of social justice at in the university’s faculty of law, and University of Stellenbosch (US) SRC chair Xola Njengele will head up Table Mountain this Sunday 22 November as a part of their #Action4inclusion campaign.

Join Madonsela on the climb

The climb will be led by the professor and Njengele, and is set to begin at 06:30. Tickets are R54 and, due to the COVID-19 restrictions that are in place, a maximum of 200 participants will be allowed to join.

The #Action4inclusion campaign is a student funding initiative that aims to ensure academic inclusion and the scrapping of student study debt. It was founded by Madonsela and the SRC, and the campaign was set out to assist students from working-class and middle-class households.

In an interview with eNCA, Njengele said student debt was a prevalent issue in many institutions across South Africa. While brainstorming ways to remedy the situation, they came up with the idea of climbing one of Cape Town’s most famous attractions, Table Mountain, to raise funds for the students.

According to Stellenbosch University News, Madonsela said: “Student debt is a global impediment to access to higher education for many students, with some of the students forced to abandon their studies when they are about to complete their degrees.

“The problem primarily affects students from the so-called missing middle and students from poor working-class backgrounds that have fallen off the NSFAS criteria, often for reasons beyond their control.”

On Saturday 28 November, Madonsela will also be hosting a walkathon in Pniel, just outside Stellenbosch. It is set to begin at 06:30 and tickets are R150, with a maximum of 500 people allowed.

Smaller walkathons will also take place around the country, so if you are not able to be in Pniel physically, you can still buy a ticket and take part.

“It is heartening to see our students and staff coming together to support one another as we work towards ensuring equal opportunities for all,” Karen Bruns, the university’s senior director of development and alumni relations told Stellenbosch University News.

FUN FACT: Did you know Madonsela climbed Kilimanjaro in 2019?

FIND OUT: 12 things you might not have known about Thuli Madonsela.

In the running for National Lotteries job

Madonsela has recently been shortlisted as one of three candidates to be interviewed for the position of chairperson of the National Lotteries Commission (NLC).

The other two candidates who have been shortlisted are civil servant and cleric Frank Chikane and human rights lawyer Barney Pityana. The three were selected from a list of 41 applicants.