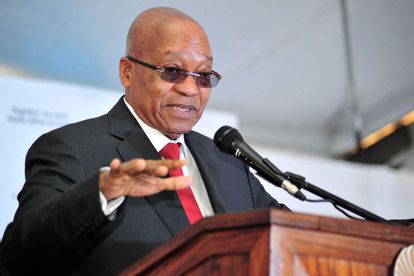 Jacob Zuma may go down as one of South Africa’s most controversial presidents. Over the years, he has built himself a solid list of critics and an equal amount of fans and it seems sometimes, the number of people who loathe Zuma outweighs those who support him.

Just recently, however, Zuma received quite a bit of praise after an old video of him dancing resurfaced on social media.

Jacob Zuma fans react to old clip of him dancing

Just the other day, people were chanting “Zuma must go” as they protested for the then president of the country to step down.

It’s been a few years since he has and it seems some people are starting to miss him.

One Twitter user, @jah_vinny shared a throwback video of Zuma addressing a crowd and then doing a little dance before leaving the podium as his colleagues cheer him on.

The video was remixed to include a popular amapiano song which of course made it even more popular amongst his fans who could not help but head to the comment section to share just how much they miss him.

While some complimented Zuma on his “good vibes” others simply wished he could once again take a seat at the head of the country.

“Comedians no longer have material ever since he descended from the biggest office in the land .”

“Msholozi was the best President we ever had in South Africa.”

Not everyone had good things to say, however.

“The highest paid comedian the country ever had.

Meanwhile, Zuma’s son, Duduzane Zuma, seems to also be building his fan base as he strengthens his campaign efforts in the hopes of following in his dad’s footsteps.