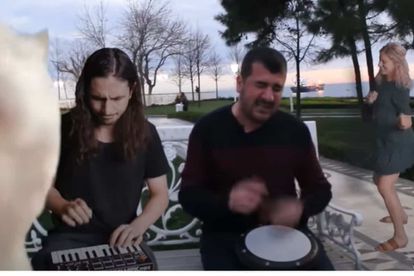 Yes, his collaboration with Bilal Göregen and the live looping remix of the street drummer’s version of Ievan Polkka quickly went viral.

“The internet made it possible for me to collab with an incredible Turkish street drummer & viral meme sensation,” the musician said referring to the cat who became a viral meme sensation last year. “Very proud of this song & how it all came together.”

“I want to dance like that,” said one Twitter user in response to the video. “I was first disappointed that it’s not another song ripping into our incompetent government. But this is one lekker tune!” said another.

During the national lockdown in March 2020, The Kiffness released his own version of Toto’s Africa in the hopes of spreading awareness around social distancing amid the coronavirus outbreak. In a previous video, Scott shared a now-viral video of President Cyril Ramaphosa doing the elbow greeting to The Knack’s 1979 debut single, My Sharona. In this case, My Corona.

Nothing surprises him anymore

After making the news in Turkey for his collaboration, he also said that nothing surprises him anymore.

“If a fortune-teller told me that I’d make the Turkish news for a remix I made of a Finnish folk tune performed by a blind street drummer with a vibing cat, I would’ve told them that after this year, nothing surprises me anymore.”

The Kiffness makes jazzy, groovy and uplifting house music and is said to be one of South Africa’s favourite live electronic acts. From the beginning of 2013, founder and brainchild David Scott has had great success in the South African music industry, racking up a total of three South African Music Award nominations and 10 singles playlisted across national radio stations – all of which have reached top 10 status in the top 40 charts.