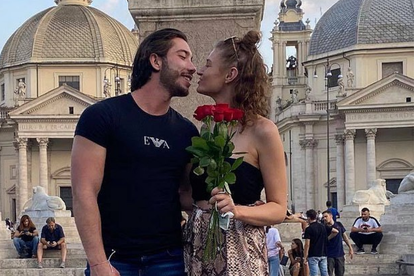 This teaching assistant may lose her license. Image via Wales News Service

This teaching assistant may lose her license. Image via Wales News Service

A teaching assistant has landed herself in trouble after asking for compassionate leave and using it to go on holiday. The 25-year-old asked for some time off to handle family responsibilities. She was then seen posing in Rome with her boyfriend who shared the snaps online.

Teaching assistant loses job after lying to get leave days

A teaching assistant may find herself without a teaching license after she took compassionate leave to go on holiday. According to reports, Ella Griffith begged her boss at Ysgol Cybi school in Anglesey, Wales for some days off to handle “a serious matter at home”.

“She spoke with me on September 17, 2020, and asked to leave early the following day and return on September 23.

The situation appeared critical in that Ella Griffith’s family needed her and she requested compassionate leave,” recalls the school’s headmaster, Rhian Grieve.

Boyfriend accidentally gets her in trouble

Her lie quickly unfolded when her boyfriend shared some snaps of the two of them enjoying a romantic getaway to Italy. Various snaps show the two of them visiting the Colosseum, Vatican City, and the Forum.

Her colleagues spotted the post and quickly reported them to the headmistress. She then confronted the teaching assistant who initially said she had flown to Italy of the weekend.

Later on, she confessed that she lied about the length of time she spent there.

Ms Griffith is now facing five counts of unprofessional conduct and may even get her teaching license revoked, Dail Mail reports.

The publication also reports that she has not attended any one of her hearings despite the fact that she will no longer be able to teach.

ALSO READ: Why Investec are offering “unlimited leave days” to their staff