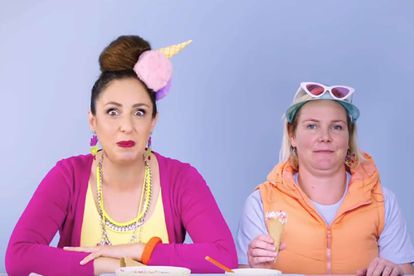 If you fancy an ice cream party treat, SuzelleDIY has got you covered.

Suzelle and her best friend, Marianne, go on to make some sprinkled party cones, sprinkled bark and ‘delicious’ and edible balloon chocolate bowls.

Together with the episode, Suzelle said:

“Oh gosh! Is it almost your birthday and you’ve ran out of clever, creative ideas for stunning DIY party treats to make? That is why this episode is DIY Ice Cream Party Treats!

“In this episode I show you how to make the most delicious, crowd-pleasing ice cream party treats using the new Country Fresh Pirates & Mermaids Ice Cream! What do you think of my gorgeous ice cream truck, guys? Which party treat are you most excited to try?”

What you will need:

Watch: SuzelleDIY’s awesome watermelon hacks you have to try this summer

Until now, Suzelle has done over 100 videos on her web-series and has also written three books.

Recently she teamed up with Comedy Central to host Most Ridiculous with a bunch of other guest celebrities like Kurt Darren, Danny K, Amor Vittone, Riaan Cruywagen and more. Suzelle basically narrates some of the funniest video clips found on the internet for the series’ third season.

“While the videos that will feature on Most Ridiculous will not be local, we wanted to weave a local thread into the format of the show. And what better way to do that than to bring on South Africa’s YouTube extraordinaire SuzelleDIY as the host, as well as have some of South Africa’s most loved and revered celebrities co-host the show with her?” Khan said.