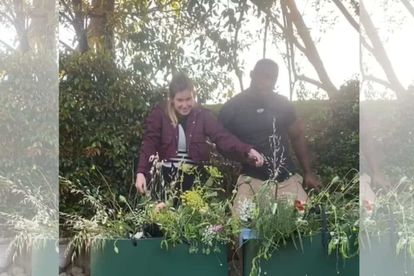 Springbok captain Siya Kolisi recently asked Beyoncé to send some help in the form of a dance teacher for his wife, Rachel.

According to All4Women, the world recently went crazy for Beyoncé and Adidas’ latest Ivy Park collection, dubbed the “Drip 2” range. The athleisure brand usually sells out extremely quickly in stores, but certain celebrities are lucky enough to get their own special packages sent directly to them by Queen B herself. Siya and Rachel were the lucky recipients of this package and went on to celebrate the good news.

After receiving their his-and-hers Ivy Park gifts, Siya and Rachel attempted to celebrate with a pre-rehearsed celebratory dance – in proper influencer style. It all looked like it was going according to script when they emerged from behind their beautifully packaged gifts, perfectly in-sync. But, it seems that Rachel decided to go off script and share her joy with her own dance moves.

Siya proceeded to write on Instagram, “Good Morning, Sisi Beyoncé and Adidas are doing the most with Ivy. Please do help for any dancing for coaches for Rachel Kolisi. I didn’t know it was this bad”

It seems this is not the first time Siya has been looking to improve his wife’s dance skills. Earlier this year Siya tried his best to teach her how to dance to DJ Mata’s popular song Bhenga. At the time, Siya, while releasing the video, said: “Caption this please” which has the masses even more fascinated. Both Siya and Rachel are in what appears to be their home, casually dressed. Siya is wearing green shorts and a crew neck while Rachel is dressed warmly in what appears to be a black tracksuit with a thick grey beanie.

Siya can be heard over the music saying; “just relax, chill” as he breaks it down.

From that moment on, Rachel starts moving her entire body to the beat. She watches Siya for directions but totally gets into it. She then tries a new move, which according to Siya, goes horribly wrong, as he jokingly says; “I wash my hands”. Laughter can be heard until the video ends.