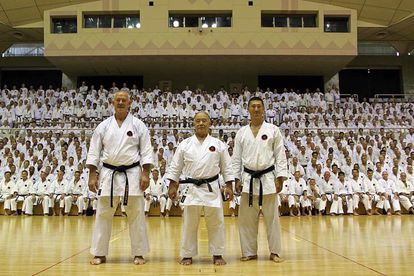 Sensei Bakkies is a 9th dan in Okinawan Goju Ryu karate, the highest graded Westerner worldwide in this traditional karate style and the chief instructor of the South African Okinawan Goju Ryu Karate Association (SAGA), which was founded in 1966.

Laubscher has had his famous karate school in Stellenbosch since 1967 and represented South Africa in two world karate championships.

He teaches regularly all over the world and has taught in 29 countries, so when his overseas commitments for 2020 were cancelled due to the COVID-19 pandemic and SAGA and his own dojo (club) had to be locked down, he realised that technology was the only way forward through this pandemic.

He started with online teaching of his own dojo and apart from African countries, such as Namibia and Zambia, he also received many requests from overseas members from countries also under lockdown or heavy restrictions to join in.

It was decided to have an online training seminar called a Gasshuku for SAGA on 19 and 20 June, and he was approached by persons from overseas to participate when they heard about it.

The Gasshuku was only for adult brown and black belts and eventually almost 200 members from 20 countries participated, ranging from California in the United States (US) to Hong Kong and Singapore in the East.

Zoom and video technology made it possible to stage the sessions at various times to accommodate all members from five continents and nine time zones.

He had to plan for scenarios such as load shedding and WiFi not working, but with good planning, things went smooth – only one electricity failure, which fortunately did not last too long.

He admits that teaching online is extremely difficult to be able to still get real Karate skills across, but with some good planning and innovation, it can be done!

He has managed to assist SAGA instructors to teach online to their dojos and they had great returns and compliments from members and parents.  SAGA also assists serious members in more remote areas by offering to subsidise airtime in order for them to keep training until they can go back to their dojos again.