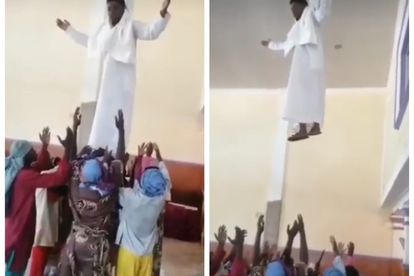 A video of a man-of-God ‘ascending’ into heaven in the presence of his congregants is doing the rounds. Image via Twitter @tebogobasuti

A video of a man-of-God ‘ascending’ into heaven in the presence of his congregants is doing the rounds. Image via Twitter @tebogobasuti

The internet has afforded us the luxury of seeing a lot of weird and wonderful things, whether real or unreal — like a viral video of a pastor reportedly in the Democratic Republic of Congo who “ascended” into heaven.

In the viral heaven video, the man, who is dressed in all white, is lifted by the congregants into the air as he slowly ascends to the ceiling.

As the ascension is taking place, with the assistance of a white rope, the church members sing and when the pastor enters “heaven” they clap in jubilation.

While this phenomenon is rare, the man-of-God would not be the first one to “enter the pearly gates.”

Remember the controversial Pastor Mboro? In 2016, the Incredible Happenings Ministries founder and leader set tongues wagging when he claimed he had gone to heaven and took pictures to “prove it.”

At the time, his spokesperson – Mr Nkuna – told local newspaper, the Katlehong Weekly, that Pastor Mboro was “captured” to heaven during an Easter Sunday service and took pictures on his Galaxy Smartphone and came back down later that same day.

He went on to say that the pictures are available for R5 000 and can be sent to recipients via WhatsApp.

SOME TWEEPS ARE CONVINCED IT WAS A PLAY

The viral video, which was posted by Twitter user @tebogobasuti, has garnered over 220 000 views and several comments.

Many tweeps found the whole heaven ascension act funny, while others were completely annoyed by it as they referred to him as a scammer.

However, a few others claimed that the video was actually a stage play for Easter.

“But dude this is a play. Surely you also can see that,” a tweep wrote.

“This was a play around Easter, I remember that this clip had been circulating around that time period,” another tweet replied.