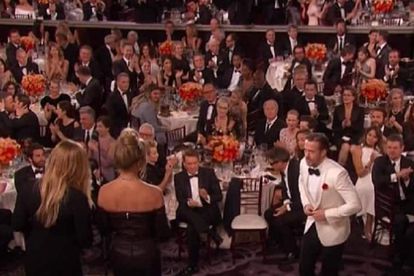 Two of the hottest Hollywood A-listers made out and everything’s going to be ok. Apart from making awesome movies, these two are pretty darn funny.Take Reynolds’ Twitter page for instance.

At this years’ Golden Globes, Ryan Reynolds was nominated for Best Actor in a Motion Picture-Comedy for the very popular movie, Deadpool, but the actor did not walk away with the award in the end. Ryan Gosling received the award instead for his role in La La Land.

While Ryan Gosling walked up to the stage, Ryan Reynolds took the chance to plant a big kiss on Andrew Garfield’s lips (the cute guy from Spiderman if you’re memory’s not serving you well).

Watch it below and keep an eye on Ryan Reynold’s wife, Blake Lively, loving the moment like the cool wife she is.

Spot the two smoochers below:

Some even dubbed the smooch between the stars of Spiderman and Deadpool as Hollywood’s hottest new couple, Spideypool.

According to News.com.au, Ryan Gosling thanked his wife, Eva Mendes, in a heartwarming speech when he won the award. He also joked that Ryan Reynolds was actually meant to have won. “This isn’t the first time I’ve been mistaken for Ryan Reynolds but I understand. Ryan, obviously there’s been some kind of mistake that I’m up here.”