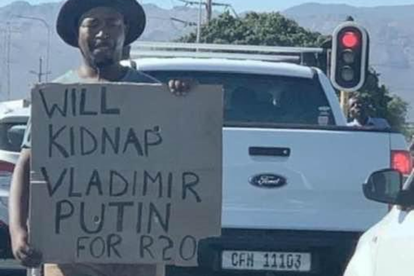 This oke will kidnap Vladimir Putin for only R20! Image via Twitter: @lubovabravitova

This oke will kidnap Vladimir Putin for only R20! Image via Twitter: @lubovabravitova

A few months ago, a traffic light beggar went viral after he was pictured holding up a sign that read “I will moer Julius Malema for R20.” Another one went viral for a sign that read that he is willing to kidnap Jacob Zuma for R20. It appears the beggars have set their eyes on bigger targets and are now promising to “take care” of Russian President Vladimir Putin for a small donation of course.

The switch in targets comes after Putin ordered his troops to invade Ukraine in February this year resulting in a war that is currently raging on.

Millions of people across the world do not agree with Vladimir Putin and his decision to invade Ukraine.

This has meant that he has gained himself a number of enemies and critics who have been wishing for his removal from power and even death over the last few weeks.

Looking to cash in on this fact, a South African beggar has made a cardboard sign which reads:

The post comes only a short while after a man went viral for holding a sign that read he is willing to klap the EFF’s Julius Malema for R20.

Another clever oke offered to kidnap one of SA’s most controversial former presidents, Jacob Zuma, also for R20.

The net is loving it

Needless to say, the cardboard sign was a big hit for many people who are sympathising with Ukrainians who have had to flee their country as the war wipes more and more people out.

Here are some online comments:

“I’ve heard of some folks who are currently very close to Putin and are planning to kidnap him at 6:22 PM on the 20th!”

“Actually, someone needs to kidnap PUTIN’s daughter and hold her hostage until he removes Russian troops from every country that IS NOT Russia.”

ALSO READ: Sjoe! Elon Musk wants to put Putin in his place, challenges him to combat