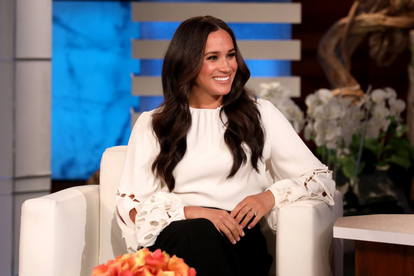 Meghan Markle is working hard to shake the reserved image that comes with being a royal. She just went on the Ellen DeGeneres show and after discussing politics, did some pranks on street vendors. The vendors from the lot outside the studio, watched as she drank from a baby’s bottle and danced – among other things.

Prince Harry and Meghan Markle shocked the world when they made a number of accusations against the royal family. They then went on to denounce their royalty and moved out of the palace.

Now Meghan is making sure that she distances herself from the royal image as much as she can – even if it means doing silly pranks on TV.

The former dutchess appeared on The Ellen DeGeneres Show where she discussed her strong feelings over mandatory paid leave for families in the US. She was then asked to participate in Ellen’s popular prank segment of the show.

Not long thereafter, Megan was seen acting a fool in front of street vendors who watched shock as Meghan did everything she was told.

At one point, she drinks milk from a baby bottle while referring to herself as a mommy. She then starts to nibble on the vendors’ cookies and chips “like a chipmunk”. Thereafter she puts on some cat ears and sings a song about kittens.

After watching the show, many Royal Family fans took to the socials to slam the former Dutchess for what they called “cringeworthy” pranks.

A lot of them maintained that she had “embarrassed” the Royal Family.

Other interesting parts of the show

During the show, Meghan also discussed how she missed her acting days and arriving for auditions in her broken-down car. She then discussed her children’s book and how happy she and hubby Prince Harry are.

Watch the clip below:

ALSO READ: Harry and Meghan may take kids to the UK to ‘fix things’ with royal family