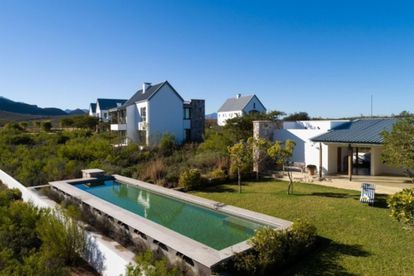 A nature preserve that is only about an hour and a half’s drive from Cape Town, pieced together by a conservationist from multiple lots, is on the market for only R75 million.

Living in your own nature preserve

The 1 195-acre plot of land near Robertson was discovered when Willem and Makkie Joubert’s daughter moved to Cape Town to study architecture. Willem told Bloomberg the story:

“It was totally unspoiled, with no infrastructure on it,” Willem says when they discovered the preserve in 2012 – just vast stretches of fynbos, incredibly biodiverse shrubland (plenty of evergreen heath, protea, iris, and lily) wholly contained within the Unesco-protected Cape Floral Region. There’s is also a greater density of unique plant species than in the world’s rainforests.

It is said that the construction did not just entail creating houses. It meant building a three-kilometre access road, a dam and an irrigation system, all without disturbing the flora and fauna. The compound itself, comprising six structures across about 26 000 square feet, according to Willem, wasn’t completed until late 2014.

The couple moved in 2015 and stayed for about five years until “our business activities caught up with us,” Makkie Joubert said. “We had to do so many flights from Cape Town and back. It’s not a way to live.”

Plus, she added, their daughter completed her degree “and she’s awfully independent now.” And so the time came to put their home on the market.

The property is listed with Aimee Campbell and Carrick Campbell of Greeff Properties for R75 million ($5 million). “We still love the place,” Makkie says, “but you know, life changes.”

Greeff properties explains that upon entering the sanctuary of the residence grounds, an abundance of towering Acacia and Fever trees greet visitors with their distinctly African contours.

“Impressive rock-clad walls have been sourced from a local quarry and create an impressive architectural statement with water-feature ponds leading you to the entrance. Once inside, one is almost overcome by the scale and grandeur of the home’s design. Rooms are extravagantly spacious, yet intimately comfortable with various sitting rooms to enjoy the incomparable north-facing views of the mountain and the ‘Serengeti plains’.”