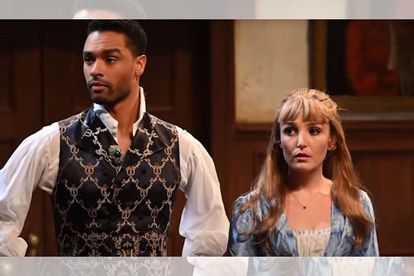 The breakout star hosted the long-running comedy series by channeling his dashing alter ego, Simon Basset, the Duke of Hastings, from the Regency-era in London as seen on the hit-Netflix series, Bridgerton.

It is reported that SNL’s Chloe Fineman was a dead ringer for Phoebe Dynevor’s Daphne in a later sketch spoofing Bridgerton’s steamy sex scenes, and she and page’s characters were caught understandably off guard when Pete Davidson and Mikey Day stepped in as inexperienced on-set intimacy coordinators.

They went on to play on the fact that sex scenes on the Netflix series (or any other series or movie) might seem to be so spontaneous and passionate, but are really the result of carefully crafted, specifically coordinated simulated sex that is all done under the watchful eye of an on-set intimacy coordinator. The scene also pokes fun at the fact that intimacy coordinators are a largely unregulated role in Hollywood. It’s a profession that has been exploding in the entertainment industry, especially in the wake of the #MeToo movement, both incredibly necessary and overdue developments.

According to ScreenRant, intimacy coordinators play an important role in any production in which there are sex scenes. They’re responsible for ensuring that everyone, both cast and crew, feels comfortable and supported while shooting any intimate scenes and that boundaries are being enforced.

Watch the highlights of Page’s ‘SNL’ performance down here

BRIDGERTON CAST TO RETURN TO PRODUCTION IN 2021

Earlier in January 2021, Bridgerton was officially renewed for season 2 by Netflix.

It is said that more than 63 million households watched the show since it was released. The first season of the series, produced by Grey’s Anatomy‘s Shonda Rhimes, follows the scandal-filled story of Daphne Bridgerton and Simon Basset as they create a romantic scheme to please their marriage-minded family members, London high society, and the mysterious gossip columnist Lady Whistledown (voiced by Julie Andrews).

When South African fans realised Page might just be “Africa’s best-kept secret” after learning about his Zimbabwean roots, it seems the actor might just be even more fascinating than his character in the series. Now, they look forward to seeing more of the actor and the Duke of Hastings alike.