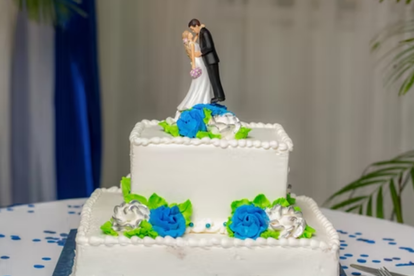 A Reddit bride has managed to get other Redditors on her side after she shared how her husband ruined her wedding with one simple act. The young bride who is still fuming over the incident shared that she specifically asked her husband not to smash the wedding cake in her face after the cake cutting – but he still did.

Many people who saw the post slammed her husband for not keeping by his promise while others remarked that it’s not a big deal.

Most people are really into weddings and want their special day to be as special as it can be.

For brides, in particular, the wedding day is one of the only days they get to experience the fairytale day they’ve always dreamed about.

So when one groom decided to ruin this for his bride, many people were instantly bashing him.

Taking to Reddit, the young bride, Key-Hovercraft-8396 asked her fellow app users if she had the right to be angry at her husband.

According to her post, she was very chilled about the wedding planning process and basically only had one request for her husband – not to smash the cake in her face as is a custom at many weddings.

“I had a suspicion that he would find it funny to do it, so, during the planning, I flat out told him not to do it. I don’t think it’s funny, I don’t want to mess up my make-up that took hours to apply, and I don’t want cake on my expensive wedding dress,” she said.

The mischievous man and his naughty cake joke

While it was a pretty reasonable request – which he agreed to – he didn’t stick to his word.

“Well, come the cake cutting time, what did he do? Smashed the cake in my face! It got on my dress, and messed up my make-up, just like I knew it would,” recounted Key-Hovercraft-8396.

While she was pretty upset, she kept smiling and laughing like a good sport but once had the chance gave her new groom quite the earful.

His response – it wasn’t that big of a deal.

Many Redditors agreed that the bride had every right to be upset and slammed the groom as both childish and inconsiderate.