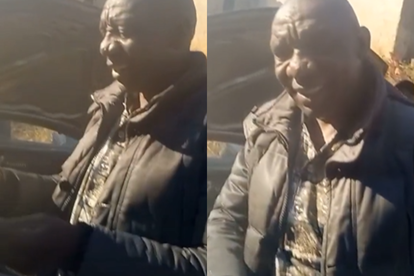 South Africa’s current petrol prices are a hot topic amongst motorists who have made it clear that they are gatvol. While many of them have shared harsh words about the government and its lack of action, others have decided to find humour in the situation. In fact, one cheeky local managed to find President Cyril Ramaphosa’s doppelgänger.

In a clip shared online, the man who looks uncannily like Ramaphosa can be seen having a bit of car trouble. According to the poster, the man, unfortunately, ran out of petrol before reaching his destination.

One thing you won’t see every day is President Cyril Ramaphosa running out of petrol.

Something you can expect to see is a Ramaphosa doppelgänger running out of petrol and it’s just as hilarious.

Taking to TikTok earlier this week, a user with the handle, @romeo-randy shared a snap of a man many are now referring to as “Ramaphosa’s twin” because of his huge resemblance to the president.

In the clip, the man can be seen stuck on the side of the road and appears to be having some car trouble.

Meanwhile, another person in the clip is seen laughing while referring to the man as “Mr President”.

Mzansi is in absolute stitches

The clip left many people laughing out loud as they discussed just how much the man looks like Ramaphosa.

Some of them joked about the president being a Polo driver.

“Yoh, for a moment I thought it was uncle Cyril.”