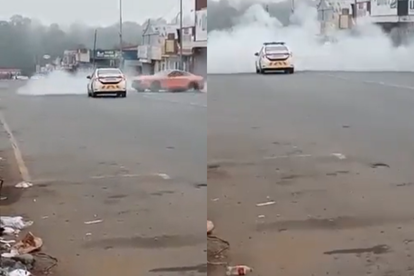 This cheeky Mustang driver pulled a fast one on KZN traffic cops. Images via Twitter: @VehicleTrackerz

This cheeky Mustang driver pulled a fast one on KZN traffic cops. Images via Twitter: @VehicleTrackerz

In South Africa, absolutely anything is possible – and people seem to prove this on a daily basis. Another hard-to-believe video has made its way online and let us just be the first to say… it’s unbelievable. In the now-viral video, a cheeky Mustang driver can be seen spinning doughnuts around a traffic police car and then shortly afterward, gets away in the opposite direction.

Mustang driver spins doughnuts around cop car and takes off

South African roads have made it the list of the most dangerous to drive on in the world. And after a video of a Mustang driver pulling dangerous tricks on a public street was shared online – it isn’t hard to know why.

In the clip that has gone viral on social media, the orange Mustang can be spinning doughnuts around a traffic cop car while completely immersing it in a thick cloud of smoke.

After making quite a few rounds, the car then speeds off in the opposite direction but not before sticking his hand out of the window and pointing at the officers.

What surprises many, is the fact that the traffic officer doesn’t even attempt to stop the Mustang by giving it a chase. Instead, the cop car continues along its way without giving it a second thought.

The video appears to have been recorded at Church Street, Vryheid, KwaZulu-Natal, reports IOL.

Heading online, @VehicleTrackerz shared the clip which they captioned:

“Mustang cuts off KZN cop car, spins his car around three times forcing the cop to stop then drifts away covering it in thick smoke. The Mustang 5.0 GT motorist pulled out his hand & pointed at the cop before speeding away leaving the Shell garage on Church.” Street Vryheid KZN…”

The post received tons of views and comments from shocked South African Twitter users. Here are a few of their thoughts on the video:

“How did we arrive at this lawlessness as a country? Zero fear of Law Enforcement Agencies.”