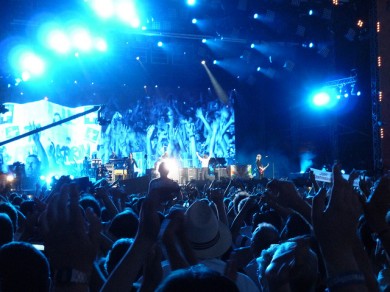 FESTIVAL SEASON is upon us!

The days are getting longer, if not warmer, and the cider is flowing. Soon it will be time to dust off that cowboy hat, pull out those wellies and dig out those short denim shorts to let them make their one and only yearly appearance at the festival of your choice.

With so much on around London, the UK and Europe — the only question is, which festival/s are you going to?

LONDON is kicking off the party, with some great staples — Hard Rock Calling and Wireless — moving to Queen Elizabeth Olympic Park. All the more room to fit in huge international headliners like Justin Timberlake, Jay Z and Bruce Springsteen.

It’s authentic, it’s righteous, it’s just so East London. Expect a heady a mix of hip hop, indie, punk and electro, and a huge dance line up you’re sure to love! Add to that giant art installations and theatrical film-sets sourced from Glastonbury and Burning Man plus random acts of absurdity, general silliness and barely controlled chaos under the trees.

No Glasto, no worries! London has the perfect antidote, bringing the biggest bands to your backyard. Plus, at the end of the day you can forget the tent and dodgy toilets, and head back to the comfort of your own home! Rock on London.

With a MASSIVE lineup in our own backyard, plus carnival rides, music workshops and street theatre performances, this is one London festival not to be missed. This year it moves to Queen Elizabeth Olympic Park — all the more room to fit in some huge international headliners.

Probably the closet festival to the front door of most Aussies in London, South West Four is an electronic feast right in the centre of south London — Clapham Common.

When it comes to a music festival, the rest of the UNITED KINGDOM may not have the weather — but it sure does have the energy, enthusiasm and contacts to put on one hell of a show.

This monster festival on the banks of Loch Ness boasts an electric selection of bands. Plus you can enjoy alongside a pint and some haggis. What more do you want?

Who wouldn’t want to party on an island? Especially when you’ll be joined by the likes of The Stone Roses, The Killers and the dulcet tones of Ben Howard, at this laidback family-friendly festival. With quirky offerings such as outdoor hot tubs, a Bohemian Woods and a ‘tea rooms’ serving cocktails in vintage crockery, this weekend is sure to be a unique UK festival experience.

Where: Newport, Isle of Wight

Like your music LOUD, with a side of rock? Download is UK’s hardcore home of metal, with this year’s line-up sure to get you pumped up and headbanging along to all the big hitters, as well as the latest emo and thrash.

Otherwise known (by whom we wonder?) as ‘The Festival of Contemporary Performing Arts’, Glastonbury is the mother of all UK festivals.

Unfortunately this year is all sold out, so this is just to let you know what you’re missing out on if you haven’t got tickets, and to help you get excited if you have!

Missed out on tickets? Here’s how to have your own Glastonbury experience, with the added bonus of clean toilets:

T in the Park

Known for attracting the liveliest of audiences, this is Scotland’s largest and longest established music festival and one of the best in Britain. This year it celebrates its 20th anniversary by featuring stacks of A-list headliners.

With a green, leafy park location, Magic Summer Live is a relaxed and chilled vibe set to a soundtrack of pop and rock. Jamiroquai is putting on his only UK performance, so well worth it for that alone. Plus — with a Surrey Sessions Stage featuring local music, and a busking at the festival bars, you may just witness the next Kings of Leon making their first mark on the festival circuit.

More than just music, Latitude is a sumptuous cultural festival. Set on the estate of a grand old English manor, it features magnificent forest and lakeside stages, and with a host of incredible activities including contemporary art exhibitions, theatrical installations and a literary arena — you certainly won’t get bored!

‘A four-day party like no other’ promises Secret Garden, and year after year this ‘party’ festival attracts the craziest and most flamboyant of followers. With its other-worldly sounds and surroundings, including its own lake, this truly magical festival is an escape from normality. Leave your rational self at home — here silliness is encouraged and madness a prerequisite. This year’s theme — Superstition.

Two venues, two days of chart topping acts, including Miss B herself. We can’t guarantee Dicky Branson will be there in his Virgin pantyhose and lipstick, but the festival will be serving up a decent dose of pop, rock and R&B that will satisfy the tastes of every good little consumer.

Where: Chelmsford and Staffordshire

If they’re on the bill here, you know they love to play cos they tear the roof off in one town, then head to the next and do it all again the very next day. With a diverse line up of acts ranging from indie and alternative rock, to punk, metal and dance, this festival won’t disappoint. And to top it off, it’s over the August Bank Holiday. Winner!

Where: Reading (and Leeds)

Sporting fireworks, freak shows and a Bollywood bus bar, the Bestival is the Isle of Wight’s flower power love child. With diverse musical acts and a carnivalesque feel, you can let loose and embrace your inner hippie. Oh and don’t forget your fancy dress! This years theme — HMS Bestival.